Home Eye on Europe Has EU Reform Ended Before It Began?

Emmanuel Macron’s big idea for an EU constitutional convention may be watered down by Ursula von der Leyen into a sideshow that could then be ignored. The European Parliament, however, wants to achieve real reform. 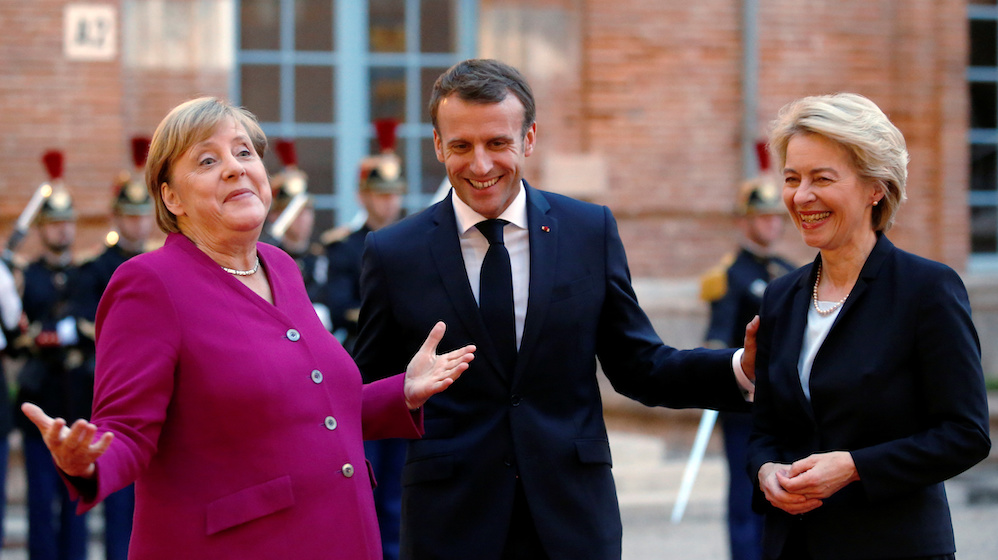 This week the European Commission adopted its stance on how to run the “Conference on the Future of Europe,” a two-year soul-searching exercise aimed at changing the way the EU works after Brexit—the pet project of French President Emmanuel Macron. But if the commission and national governments get their way, it may be a useless exercise that will be quickly forgotten.

Last week the European Parliament was the first of the EU’s three governing institutions to adopt its position on how to run the conference, set to begin in May. Their position, adopted by 494 votes to 147, would create a highly organized system of citizens’ assemblies across Europe, composed of up to 300 people each. Several bodies would be set up to run the conference, including a “conference plenary,” a “steering committee” and an “executive board.” Former Belgian prime minister Guy Verhofstadt, who has been the parliament’s Brexit spokesperson, was chosen to lead the process.

Most significantly, the parliament would give citizens specific questions to wrestle with, involving structural changes to the EU to make it more fit for the challenges to come in the 21st century. They want to ask citizens if they think EU elections should be more direct, for instance by directly electing the European Commission president, and if they think it should be easier for the EU to make foreign policy and tax decisions by removing the ability for a single country to use its veto. The prospect of achieving this through treaty change, something that still terrifies EU national governments since the Lisbon Treaty nightmare ten years ago, is embraced by the European Parliament. MEPs say this conference should result in major changes in how the EU works.

Indeed, what the parliament is envisioning resembles the Convention on the Future of the European Union which ran from 2002 to 2003 and ended with the Treaty Establishing a Constitution for Europe. That constitution was notoriously rejected by French and Dutch voters in 2005. The EU then set out on a long arduous process of ratifying the Lisbon Treaty, which contained most of the structural changes of the defeated constitution without the trappings of a federation (and therefore not subject to a referendum in France).

That was then, this is now. Macron, backed by the European Parliament, believes that the situation has changed dramatically in the last 15 years. The combined lessons of Brexit and Donald Trump have shown Europeans that a strong EU is needed to guarantee European sovereignty. In 2005 the EU was a backburner issue few people thought about, and indeed polling showed the reason for the constitution’s defeat had more to do with punishing sitting national governments than its actual contents.

The conference should “propose all the necessary changes to our political project, without any taboos, not even treaty revision,” Macron said when proposing the idea last year. But outside Paris, national capitals don’t feel the same way. The crises prompted by the French and Dutch constitution rejection in 2005 and the Irish Lisbon Treaty rejection in 2008 still haunt them. Last month the European Council of 28 national leaders showed little enthusiasm for the project when they half-heartedly endorsed the idea but refrained from saying anything about it.

National EU ambassadors are expected to discuss the issue this week ahead of the EU affairs ministers’ first discussion on the conference next Tuesday. But it’s very uncertain whether leaders will adopt a position at their March European Council summit—something that would be necessary for the conference to start in May as planned. More than likely, they will delay the start of the conference as long as possible—to Macron’s great irritation.

While Angela Merkel has publicly spoken positively of Macron’s idea, privately she is said to be terrified of the idea of it leading to treaty change and would prefer for it to remain a purely public relations exercise. Once again, Macron’s appeals for EU reforms are hitting a German wall.

Commission President Ursula von der Leyen couldn’t be in Brussels herself for the adoption of the commission’s position on Wednesday, as she was speaking at the World Economic Forum in Davos at the same time. “This is about Europe shaping its own future,” she told the world’s rich and powerful meeting in the Swiss mountain resort. “But to be more assertive in the world, we know we must step up in some fields. Recent events have exposed where we have to do more.”

However, the commission’s position on the future of Europe unveiled just 30 minutes later in Brussels didn’t seem to reflect this sense of urgency. Instead, the communication to citizens seems to say von der Leyen believes the EU is functioning just fine.

The commission goes into little detail about how the conference should be run, but it rejects the parliament’s idea for citizen assemblies saying instead it should “build on the well-established citizens’ dialogues.” One could be forgiven for having never heard of these town-hall-style dialogues, even though 1,850 have been held between citizens and commissioners in 650 locations across Europe, according to the commission.

Announcing the commission’s proposal to the press, Dubravka Šuica, Vice President for Democracy and Demography, said the conference should first focus on the EU’s headline policy ambitions of climate change, economic equality, and digital transformation.

A second, seemingly less important strand would focus on structural issues. A reference in an earlier version of the text to taking legislative action and proposing treaty change “if appropriate” was taken out.

“This will be a bottom-up forum for open and inclusive debate accessible to people from all corners of the union,” said Šuica. “We want to go beyond the cities, beyond the capitals, we want to reach also those who are critical toward the EU.”

Conducting the conference at sporting events or festivals could be one way of reaching those citizens who are not currently engaged, she said.

Šuica said an open-ended approach is better than one which already tells the citizens what the structural problems are that need to be solved. “This will be more a listening exercise than talking. And when we hear what citizens want, we will try to transpose this into policies and maybe some legal acts.”

“We are not going to pre-empt what will be the outcome of these roundtables. We will allow citizens to tell us what they want. If they want treaty change, we are open to this. Parliament and council have more to say on this than the commission—but we have nothing against it.”

It might sound very democratic, but critics point out that it is unrealistic to expect citizens to know what the structural problems are or what treaty change means. Without asking citizens specific questions about what they want, and rather just sitting back and saying, “Tell me what you want,” the feedback is likely to result in an unusable cacophony of voices. This may perfectly suit those national leaders who don’t want the exercise to result in a specific mandate to change how the EU works.

Critics have also questioned the commission’s decision to primarily focus on current policy priorities and place secondary importance on long-term governance issues. Given this is a conference on the future of Europe, why is it being restricted to the policy preoccupations of the present?

German MEP Gabriele Bischoff, a Social Democrat member of the European Parliament’s working group on the conference, told the EUObserver news website that the commission’s position is “not very ambitious, not very clear, not very outspoken, and is not addressing what should come out of this conference.”

However, she said at least the commission has not ruled anything out, as the council seems likely to do.

Once the council adopts its position, the presidents of the three institutions will meet to agree a consolidated approach. Given that the parliament’s position will be drastically different than the council’s, von der Leyen will be the one casting the deciding vote. If she sides with the MEPs she will score points with Macron, but anger Merkel and others.

Observers say that if she decides to demure to Berlin and other national capitals on how to run the conference, it could render it a useless exercise that is ignored and then quickly forgotten.