Germany needs to rethink how it remembers—and why it does. 75 years after the liberation of Auschwitz, it’s not enough to say “never again.” 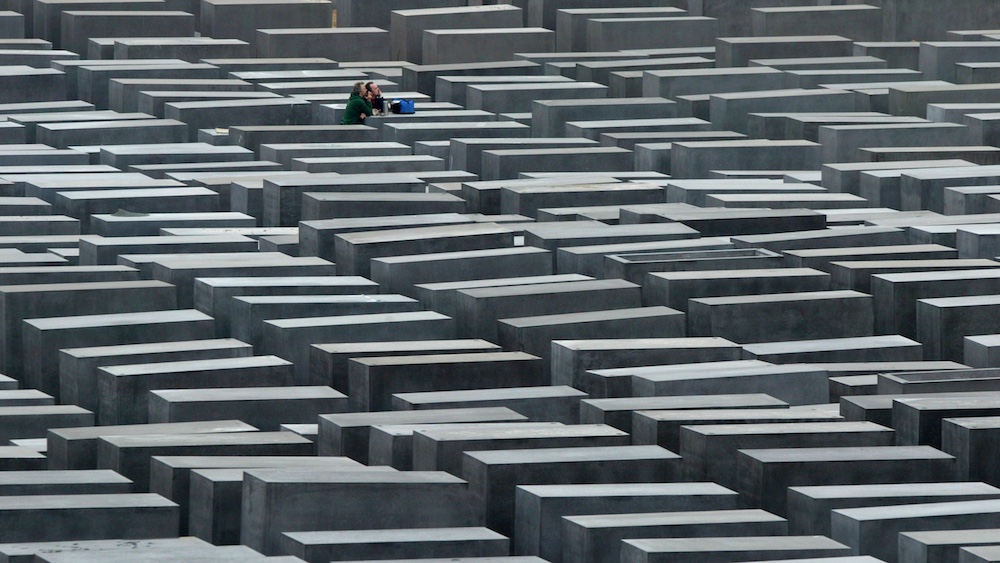 When more than a million mostly Arab and Muslim refugees poured into Germany in 2015, large groups of smiling Germans gathered at train stations to greet them. They came with multilingual posters, teddy bears, and hot chocolate.

It was an emotional moment in Germany’s postwar history, as if the whole country was breathing a sigh of relief: Maybe we got it right this time? Maybe we can put the past behind us? But the collective exhale was conditional: What now?

It was clear to me at the time that the moment wouldn’t last. I was living in Neukölln, one of Berlin’s largest, poorest, and most ethnically diverse districts. Home to Arab communities, among many others, Neukölln is known for falafel and crime gangs of Arab origin. A walk down Sonnenallee, the neighborhood’s main thoroughfare, often recalls memories of Ramallah—clogged with traffic and lined with shops whose Arabic signage extends as far as the eye can see.

It may look like first-generation immigrant life. Except many here and across Germany, home to an estimated four million Muslims, are going into their third generation—or more. And that’s one way they’re referred to here: die dritte Generation, not as Germans, regardless of birthplace, passport, or language.

The Jews have had it similar, for longer. Their roots on Germanic land going back to Roman times arguably makes them more German than the “Germans.” Still, Jews were excluded from the concept of German nationhood, which coalesced in the decades leading to Prussian-led unification in 1871. It was the awakening of the European nation-state, making it necessary to compete with, and fend off, rival powers.

Establishing das Volk, the German nation, became a defensive (and economically attractive) bond of language, land, and religion that Germany’s tiny minority of Jews fell outside of. No matter how hard they tried—with military service, contributions to German culture and financial well-being, and even conversion—they could be tolerated as citizens of the German state, but not really accepted as members of the German nation. Like any national project, German nationalists needed to define who was out just as much as who was in.

We all know how this narrow concept of nationalism ended, and that’s where Erinnerungskultur —Germany’s reckoning with its murder of much of Europe’s Jewry and assorted other wartime crimes, now a cornerstone of its postwar sense of self—begins. And stumbles, because Germany’s story doesn’t start in 1933; thus, any effective remembrance culture can’t either.

For Germans and outside observers alike, it can be easy to assume present-day Germany knows what it’s doing. In one form or another, Germany has had centuries of influence on Western culture and global affairs, and it’s credited with the formation of organized public bureaucracy. But in terms of liberal democracy, Germany is comparatively new and untested.

An Installed Program of Remembrance

Born-again Germany derives from American Cold War policy, which converted the defeated Reich from a threat to the West into a tool for the West’s protection. Truer political autonomy can only be traced to around 1990. When West absorbed East, Germany became a new country, one with differing views of its national values. Since then, Germany has been held to the standard of an advanced Western power, with little regard for its eastern identity.

Erinnerungskultur was central to “re-educating” the German nation, starting as early as spring 1945 when US forces compelled German civilians to tour death camps. Though Germany is now widely praised for openly embracing Erinnerungskultur as a national responsibility, it was only after the code had been written and installed that the program could run on its own.

An entire culture of remembrance has since been pursued with zeal: memorials and monuments, commemorations, educational curricula, public programs, and political rhetoric, symbols and structures—all to serve the refrain: nie wieder. Never again.

But it’s far from clear what nie wieder actually means. It might form the basis of a more open and progressive society, but Germany is hardly a leader in extending rights, opportunities, and protections to women, minorities, and other vulnerable groups. Change comes slowly to its conservative culture.

The country is still struggling with what to make of Turkish Gastarbeiter, many of whom went on to defy German assumptions by staying permanently after initially being invited to further boost West Germany booming economy. So, when the massive influx of refugees arrived, uninvited, in 2015, the rapid descent from euphoria to fear came as little surprise. The German nation, by and large, was not prepared to absorb them.

A Matter of Self-Conception

Germany’s problem is not the lack of a liberal state. Its history provides a couple of examples of extending legal rights to unwanted or outside groups, at times more comprehensively than its contemporaries. But without the support of a liberal nation those rights can quickly disappear.

That has been and remains Germany’s problem, which Erinnerungskultur fails to address. The German nation may be quick to criticize its fringe for marching in defense of the so-called Abendland (or Occident), but it’s blind to its mainstream’s own stubborn Abendland assumptions. Germany’s enormous public media system, for example, is a national institution, a reflection of the country it is built to inform. Although funded by a fee every household in Germany is obligated to pay, church services and Christian prayer enjoy a fixed slot in regular programming.

When I enquired why, I was told that Christianity is part of Germany’s Selbstverständnis—a matter of self-conception—and therefore a key component of their public service mission. That is not only factually inaccurate, given the steady stream of Germans leaving the church and the rise in those identifying as non-Christian and non-believers, but it sends a powerful signal about who is, and is not, considered part of the nation.

When Jews, Muslims, and other groups fall victim to far-right violence, the German response is couched in the language of tolerance, not acceptance. State protection is afforded on the basis of human rights, not German rights, because these groups are considered outsiders even though in many cases they are not. The German state may want everyone to feel welcome, but the German nation does not necessarily want everyone to feel included. Having or receiving Staatsangehörigkeit (citizenship, but literally “belonging to the state”), is not the same as having Herkunft (ethnonational descent).

A substantive Erinnerungskultur would naturally foster broad public support for a strong European Union, whose core function is to check the very nationalist hubris Erinnerungskultur warns against. Yet Germany’s embrace of the EU stops largely with perfunctory political rhetoric and positive public opinion polls. Judged by deeds, Germany’s trade imbalance, savings glut, and resistance to the ECB’s loose monetary policy have kept the EU in limbo. It has repeatedly kneecapped reform proposals while failing to make any of its own.

Even if the likes of Chancellor Angela Merkel do privately support more ambition at the European level, she seemingly lacks the political capital. Enough Germans seem content with an EU that is only strong enough to fulfill a very basic prerequisite: avoid war. That may have sufficed in the EU’s infancy when memories of the devastation were fresh, but 75 years later those memories are all but gone. That demands more tangible and more constructive, forward-looking arguments for turning to Brussels.

By the numbers, of course, Germany has profited handsomely from the EU. But nationalism is a beast that feeds off other metrics. Nativist sentiment was already brewing prior to the emergence of the far-right Alternative for Germany (AfD), as economic and currency crises brought out old tropes maligning Germany’s eastern and southern neighbors in the media, and public and political discourse. It’s the inadequacy of Erinnerungskultur that fails to see the cause and effect.

Germany’s far-right has exploited that inadequacy. Making everything about Auschwitz, and thus limiting remembrance to twelve years of moral and physical destruction, has allowed lesser wrongs be trivialized, relativized, or go unseen entirely. Uncertain about the ends, Erinnerungskultur has become a ritualistic end in itself, not unlike a lapsed believer who still attends church because that’s just what you do, even if you no longer know why.

With the Holocaust slipping from lived experience to historical phenomenon, Germany needs to rethink how it remembers—and why it does. It is not enough to say “never again.” Prodding a nation with guilt and shame eventually leads to spite and ambivalence. A more convincing motivation is required, which isn’t trapped in the past but focused on the future.

Much as climate change extends far beyond environmental policy, Erinnerungskultur must be part of every aspect of public policy and civil society. The German state can confront far-right violence with statements, laws, and law enforcement, but the German nation is left to address its broader longing for classification and order, impulses that pre-date the Nazi era and still linger today.