Home Eye on Europe Green Sprouts, But No Early Spring

Impressive electoral victories in Germany and Belgium in mid-October fueled speculation that the environmentalists with a social conscience might be the ones to counter the rise of populism in Europe. But on a European level, the much-celebrated Green surge is being held back by a lack of representation in eastern and southern EU countries. 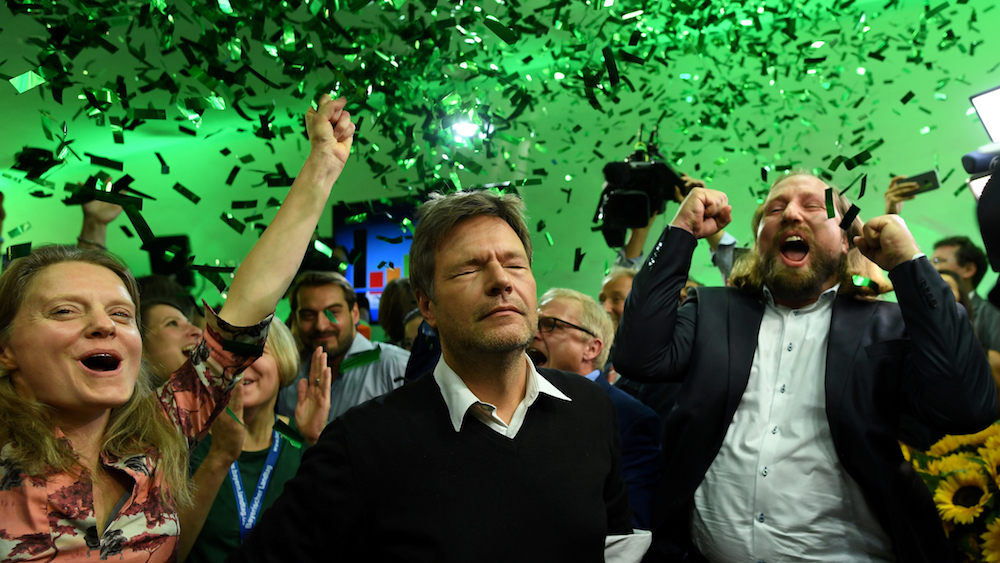 Germany’s Die Grünen, now polling around 20 percent as the second-strongest party after Angela Merkel’s Christian Democrats and surging in regional elections in Bavaria and Hesse, refer to themselves as the “alternative to the Alternative” in a poke to the German anti-immigration, far-right party, Alternative für Deutschland. Indeed, the pro-Europe, pro-environment, pro-immigration party offers strikingly different answers to the issues mostly dominated by the far-right rhetoric recently.

Their sister parties in Belgium and in the Netherlands have also done well at the polls. In the 2017 general Dutch elections, while all eyes were on far-right Geert Wilders’ Freedom Party, the GroenLinks clinched the highest number of seats in parliament in their history. With their roots in environmental protest movements, Green parties can claim to be outsiders rather than mainstream.

The Greens have been picking up voters who feel betrayed by socialists or social democrats, and are uncomfortable with the far-right’s fear-mongering. They have been less successful in persuading liberal or center-right voters in significant numbers, except in Germany. Nevertheless, they seem to be well-equipped for a political arena that is no longer only divided by left and right, but is also dissected along fault lines between open and closed societies, pro-European and nationalist, urban and rural.

But despite the enthusiasm around the Green momentum this fall, it’s not likely to translate into a substantially bigger portion of the seats in the European Parliament at next spring’s election, or a bigger say in EU affairs. The Greens are not expected to dramatically increase their numbers, currently at 52 MEPs, although top mainstream parties, the center-right European People’s Party (EPP), and the center-left Party of European Socialists (PES), are both likely to lose dozens of seats.

Yet the Green group’s co-chair in the European Parliament Belgian MEP Philippe Lamberts sounds optimistic that Greens can deliver the recipe against populists in an age of anxiety about climate change and migration, coupled with the fear of being left behind by globalization.

“I have a good feeling about this election. The situation is worrying, populism is on the rise, but their victory is not a given. They have won in Italy, but have performed worse than expected in Sweden and the Netherlands,” he said recently.

While French president Emmanuel Macron is pitching himself against champions of illiberal democracy in Europe, such as Hungary’s Viktor Orbán or Italy’s Matteo Salvini, expectations that he could transform European politics have dipped sharply. Macron has been mired in a political crisis at home, facing protestors whose cause the Greens are aiming to embrace.

“Macron is right that this election will pit national-populists against ‘progressives.’ But he is mistaken as far as the subject of the confrontation is concerned. This is about who offers the most credible and desirable alternative to mainstream policies, which Macron himself embodies—policies that make the EU the vehicle of adaptation for our countries to the neo-liberal version of globalization,” Lamberts quipped.

Greens are arguing for a need to address the concerns of voters who fled to the far-right. They point to deprived rural areas, where people feel abandoned as public services withdrew due to spending cuts. They point to the middle classes who are struggling to make ends meet, and some in the party argue that a socially blind green party has no future.

That means rethinking some of the underlying policies of the European project, such as pursuing economic growth above anything else. “What is good for Volkswagen is not automatically good for Germany. We have to do away with this thinking,” the Belgian politician said.

Greens emphasize that this approach could quell anxieties about migration as well, arguing that in the October elections Greens gained votes not despite, but because of migration.

“Either you run exclusion policies inside and outside, or you promote solidarity outside and inside,” Lamberts said, adding: “People want to hear a realistic solution on migration, that combines humanism and realism.”

“Not a Luxury Thing”

Lamberts’ emphasis on the social aspects has a practical side. Greens have to battle the perception that they represent well-off urbanites who can afford to worry about whales and forests.

“Green issues are not a luxury thing,” the German co-chair of the Green group in the EU parliament, Ska Keller said. She is one of the party’s lead candidates in the European election. “Climate change is very much a social issue,” she added, pointing out that rich people can move away from bad air quality or buy better quality food products.

But while it seems that uncertain voters in Germany and the Nordic countries hear that message, it has been far less successful in eastern and southern Europe.

Doru Frantescu, director of VoteWatch Europe, a think-tank in Brussels, said it is unlikely there would be a green wave next May. Victories are isolated and do not represent a continent-wide trend, he added. However, if the German Greens maintained their position as second biggest party at home, the party could come 5th overall in the EU parliament next year.

“But that’s the exception, not the rule,” Frantescu said. “Greens are quasi non-existent in Spain, Poland, and Italy.” According to VoteWatch Europe’s projections, the Greens will more or less maintain their numbers in the European Parliament, he added.

Few and Far Between

Currently, the Greens have two Hungarian MEPs who hail from different national parties, and a few from the Balkans and the Baltics. In general, however, Greens are seen as too radical and too left-wing in much of central and eastern Europe to attract sizeable support. While environmentalists played an important role in standing up for human rights and the rule of law, they face considerable obstacles in actually becoming viable political forces in countries that tend to be culturally more conservative, Frantescu said.

Keller, however, insists the tide is turning. “It’s not just a northern, western thing. In the south and the east of Europe we are doing well, too” the German MEP said, pointing out that a Green party managed to put forward candidates in each district in local elections in Poland recently. Green topics have also come to the forefront in Bulgaria, she added.

Indrek Tarand, an independent Estonian politician who sits with the Greens in the European Parliament said he hoped that voters would pick “a humanist trajectory for Europe, instead of those who want to take us back to the Middle Ages,” he said, referring to populist and extremist forces.

He also pointed out that Die Grünen in Germany were founded almost 40 years ago. “Perhaps we need more time,” he said.