The far-right AfD has gained ever more popularity since its breakthrough in 2017. The party’s rise has been aided by German media and politics, and its rise is set to continue. 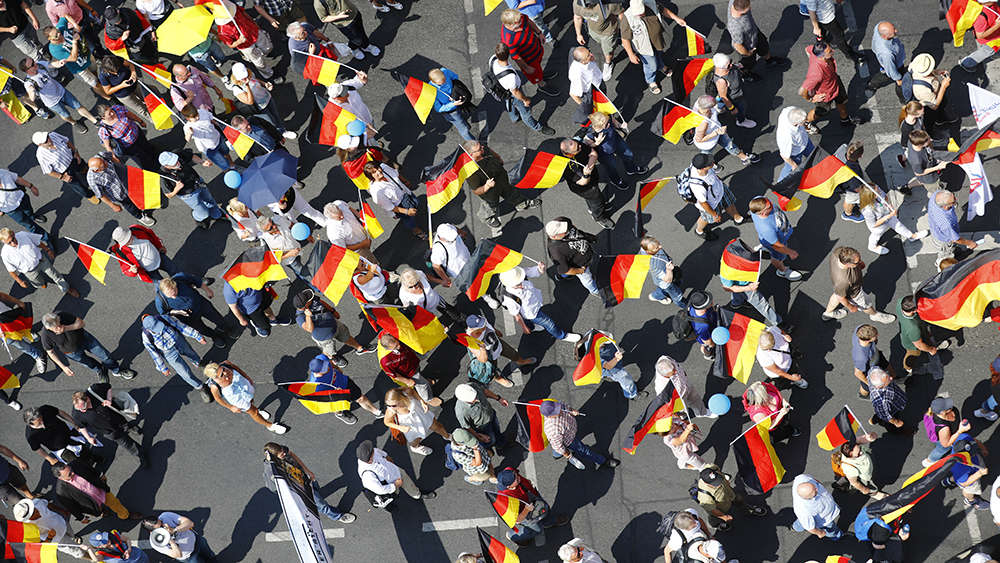 Political journalists in Berlin often do a thing called a Hintergrundgespräch. This “background conversation,” as the English translation would be, involves gathering in an airless room of a ministry or a party HQ with a group of favored colleagues and some alpha politician, who then tells you what’s what. Or what’s really what. The mood is relaxed and pally, and the etiquette is: recording devices and photos are not allowed, and though notes may be taken, direct quotes can’t be used. Free drinks are provided. The first time I went to a Hintergrundgespräch, not very long ago, a heavy realization dawned on me: This is why people hate us. This is why people vote AfD. I’m not the only journalist who feels that the political class and the press in the capital have gotten used to their cozy arrangement. This exacerbates the impression that political journalists are being spoon-fed their stories by politicians.

For a country that guards stability so carefully, the Alternative für Deutschland (AfD) is an electoral phenomenon. In its five-year life, this unashamedly populist and often ill-disciplined party has become the third biggest group in the German parliament, the Bundestag, and has put representatives into all state parliaments—the last one on October 28 in Hesse. And it’s not certain that they’ve plateaued. The AfD’s popularity has only ballooned since the national election breakthrough in 2017: more than 15 percent of German voters currently declare for the AfD, up from 12.6 percent in September 2017. The party’s stronghold is in eastern Germany, where it attracts nearly one in four voters.

The AfD is still fundamentally repugnant to all the other mainstream parties, who have ruled out joining coalitions with them (though the resolve of the Christian Democrats in Saxony, a bastion of right-wing politics, is beginning to crumble). This is mainly because it harbors open racists and flirts with revisionism about Germany’s remembrance for the Holocaust (a shrill dog-whistle to Germany’s big neo-Nazi scene).

A couple of obvious factors have helped the AfD get itself established in the German party system in the past year: weariness with Chancellor Angela Merkel after she formed yet another centrist government between her conservatives and the Social Democrats, coupled with exasperation that this new Merkel administration has done little more than lurch from one crisis to the next, tearing itself apart over the perennial problem of refugee policy. In fact, migration is almost never out of the news, even though the “refugee crisis” is now more than three years old, and Merkel has done all she can within legal limits to close Germany’s borders.

Florian Hartleb, political scientist and author of a book on European populism, thinks this last point is crucial. Ever since Merkel’s fateful decision in 2015, the media made things too easy for the AfD, first by relentlessly demonizing them, and then by keeping their most important issue on the front pages.

The media has done some soul-searching recently: a 2017 study by the Hamburg Media School and Leipzig University found that the majority of news outlets had taken on the government’s “slogans” on migration too uncritically. Merkel’s famous line “Wir schaffen das” (“We’ll manage that”) had simply been adopted, rather than scrutinized. “It was easy for the AfD to play the counterpart,” said Hartleb. “And the more we talk about migration, the more the chances are for the AfD.”

A Party of Pessimists

But the origins of the AfD pre-date 2015, and, if you believe the party’s strategists, the refugee crisis was simply the moment when 15 years of frustration with complacent German centrism finally crystallized around it.

“The refugee crisis broke the trust in established politics,” says Rainer Erkens, an AfD member who lives in Berlin. “For years politicians were doing things that they did not have a mandate for, which were not even remotely an issue in elections.” He goes on to list all the decisions made by successive German governments “over the people’s heads”: creating the euro, the Hartz IV social welfare reforms, abandoning nuclear power, abolishing military service, and bailing out Greece in the aftermath of the eurozone debt crisis.

This is what, Erkens believes, made Merkel’s decision to open borders in 2015 the last straw for many voters. “People realized that politicians were pursuing policies that had nothing to do with election campaigns. They were getting majorities in elections for policies they’re not even pursuing.”

But there’s another feeling that AfD voters share, according to Erkens: an all-pervading pessimism. “If you really want to understand why people like the AfD, then you have to see that people who vote for the AfD have a specific image of Germany. And this image is: Germany is going down the drain,” he says. Then comes another list: the images of Germany’s deterioration; the state of the Bundeswehr; the “energy transition” to renewable sources running out of steam; the debts of other EU countries; the alleged “Islamization” of German society; and, as Erkens puts it, “what does climate protection even mean, and how much will that cost us?” All these are the weeds creeping underfoot, destabilizing Germany’s economic power.

That’s why, as Erkens tells it, AfD voters are unaffected by the scandals that outrage everyone else. One of the more recent ones came in June, when party leader Alexander Gauland triggered a tsunami of outrage because of a speech describing the Third Reich as “a bird-shit in a thousand years of successful German history.”

The AfD voters’ pessimism supersedes all such scruples. “If you have the feeling that Germany is going down the drain, and if there is one party, the AfD, which is saying exactly that, then you couldn’t care less that Gauland uses the term ‘bird-shit’ when he talks about the Nazi chapter in German history,” says Erkens. “The AfD is much more important than one politician possibly talking nonsense. It’s in this context quite irrelevant.”

More than this, the media’s fixation on such outbursts, and on dubious figures like Björn Höcke, who was almost thrown out of the AfD in 2017 for describing Berlin’s Holocaust monument as a “memorial of shame,” only pushes AfD voters into protecting their leaders.

That is at least what Ronald Gläser, AfD spokesman in Berlin, believes. “I think a lot of people in the AfD weren’t particularly crazy about that, but it’s not important enough—it’s forgotten about three days later,” he says. “Those outrage issues do accompany us, but they don’t harm us that much. And of course, when the media reports about us so hysterically, that is useful for us.”

And anyway, as Gläser acknowledges, the AfD needs Höcke to keep the party’s extremist elements on its side: “We can’t just throw a leading figure of our party out—or at least if we did, it would have a huge effect. Björn Höcke is an important figure for the AfD.”

Hartleb, the political analyst, says deliberately baiting the media is a calculated strategy. “There is this taboo-breaking logic: you make a bald provocation, then you say it was just a misunderstanding, then you go one step further,” he said. “It doesn’t help anymore to just blame the voters of the AfD. It doesn’t help to say that these are neo-Nazis. And it also doesn’t help to bring them into coalition—Germany can’t do this because of its past.”

So if you can’t beat them or join them, what strategies are left? October’s election in Bavaria showed that only the parties that are not divided over migration are winning—the AfD and the Greens. Either you’re for a diverse society or you’re against it. This, as Erkens says, is where the political debate in Germany is headed: “In the future there will be two big parties: the Greens and the AfD. Those will be the poles, and between them there will be three other parties crawling around, at 10 or 15 percent: the SPD, FDP, and the CDU … They will have a little more of one or the other side. It’s perfectly feasible that that will be our party system.”