The rules-based international order is under immense pressure, and ever more people are looking to Germany for answers. That is why Berlin is seeking a non-permanent seat on the UN Security Council. 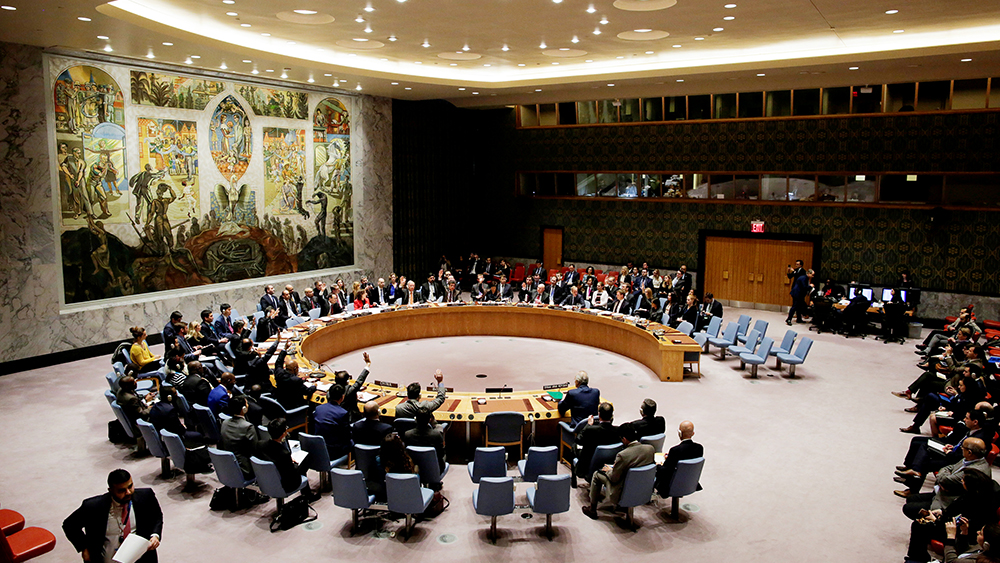 Without a doubt, multilateral cooperation has seen better years than the last. It is true that during the United Nations’ 72nd General Debate in 2017, the overwhelming majority of the 193 member states affirmed their commitment to the values and goals of active multilateralism and signaled their willingness to find joint solutions to global challenges. But the fact that the benefits of multilateralism even needed to be praised in the hall of the UN General Assembly, one of the most well-known symbols of our multilateral order, shows that something has gone wrong.

The termination of the Paris Climate Accord, the withdrawal from UNESCO and the negotiations for a global migration pact, and the violation of binding Security Council resolutions by the United States have noticeably increased uncertainty around the world. These developments show that the United States, the leading power of the western world and key state in the existing multilateral order, is increasingly following sovereignty as its guiding principle for action on the global stage. In his first speech before the UN General Assembly in September 2017, US President Donald Trump mentioned the term “sovereignty” 21 times.

Invoking the principle of sovereignty is nothing new at the UN. But until now, the term was mostly used to fend off unwanted interference in internal affairs, most often in relation to the human rights situation or territorial disputes.

Among such staunch supporters of sovereignty, however, one can also find states that fail to respect the sovereignty of other states when their interests stand opposed. In the 1994 Budapest Memorandum, Russia gave its assurance that it would recognize the sovereignty and territorial integrity of Ukraine in exchange for Ukraine’s renunciation of nuclear weapons. This binding obligation was unilaterally violated by Moscow in 2014 when it annexed Crimea and destabilized eastern Ukraine. And China, always a strong defender of sovereignty, does not consider itself bound to this principle when neighboring states assert territorial claims in the South China Sea which have been confirmed under international law.

A World in Crisis

The rising pressure on the familiar international order is happening at a time when the international community faces enormous challenges.

Numerous armed conflicts have remained unsolved for years and create new victims every day. Conflicts rage in Yemen, Syria, South Sudan, and Ukraine, just to name a few. Fear of death and persecution and economic hardship have resulted in the largest number of refugees since 1945: 65 million people are currently displaced internally or abroad.

Climate change will also lead to a long-term increase in refugee populations if people in small island states and coastal regions lose their livelihoods as the sea level rises and natural disasters become more frequent. But even within the interior of continents, droughts and desertification threaten to degrade entire regions, with negative consequences for the economic development of entire countries.

Poverty and hopelessness, especially among the younger generations, are not only a cause of flight and migration: They often provide a breeding ground for extremism and radicalization and drive a steady stream of new recruits into the arms of terrorist groups like ISIS, Boko Haram, and Al-Shabab.

Overpopulation, the expansion of people into previously uninhabited regions and the global increase in mobility bear the risk of new transmission routes for rare, highly dangerous pathogens. The Ebola crisis of 2014/2015 dramatically showed us that viruses do not stop at borders in our highly interconnected world. The healthcare systems in the affected countries were hopelessly overwhelmed by the epidemic.

More Important Than Ever

Whether flight and migration, poverty, climate change, terrorism, or pandemics, no organization other than the United Nations has the necessary legitimacy to address these challenges.

Under the umbrella of the United Nations, the heads of state and government of 193 member states adopted the 17 Sustainable Development Goals (SDGs) of the 2030 Agenda in the summer of 2015. Under the UN’s leadership, this agenda will achieve development in the coming years without overburdening our planet’s limited natural resources. Fighting poverty and supporting gender equality, access to schooling, water and sanitation, sustainable urban development, climate protection, and good governance are part of this agenda, which for the first time links social progress and sustainability and is explicitly addressed to all member states, including wealthy industrialized nations.

UN agencies like the United Nations High Commissioner for Refugees (UNHCR) and the World Food Program (WFP) offer millions of refugees in camps and reception facilities a place where they are safe and receive a minimum of care.

More than 120,000 blue helmets in 16 missions on four continents often form the last remaining buffer between conflict parties and help prevent even worse bloodshed. Often, these armed conflicts are not even picked up in the news cycle.

The World Health Organization (WHO), also a coordinating agency of the United Nations, helps protect lives and prevents the spread of pandemics by harmonizing and financing global vaccination programs.

In light of these numerous crises and conflicts, the United Nations, 72 years after its founding, is more important now than ever before—as a mediator, platform for dialogue, and defender of international law. To put it differently: If the UN did not already exist, we would have to create it. Nevertheless, the UN is often the object of criticism. Its procedures are too inflexible and bureaucratic; its administration is too expensive; and its peace missions are too ineffective and plagued by scandal. It is therefore not surprising that Secretary-General Antonio Guterres made it a top priority to initiate important reform processes with the goal of making the organization fit for purpose. Germany strongly supports the Secretary-General’s reform agenda.

The most fundamental purpose of the United Nations is to preserve international peace and security. The UN body charged with this mission is the UN Security Council. The Council can pass legally binding resolutions, impose sanctions and order military operations. The German government is seeking a seat on the Council for the 2019-20 term and has good reasons for doing so.

Germany’s foreign policy role has grown considerably in recent years. Sustainable development, climate protection, and the implementation of the 2030 Agenda are priorities of our global engagement as are the promotion of crisis prevention, stabilization and post-conflict peacebuilding. As the chair of various international fora like the G7, OSCE, and most recently the G20, Germany was able to shape the global agenda and make its mark. Germany has shown that it is willing and able to do more for conflict resolution in international negotiations such as the talks on the Iranian nuclear program and the Minsk Agreement. We are an increasingly in-demand partner in the multilateral environment, not only in the EU, OSCE, and NATO, but also here at the UN.

With our growing international weight, we want to help the Security Council more effectively fulfill its duty to preserve peace and security in our increasingly complex world. We want to help solve the most pressing crises and conflicts and put the focus on their root causes.

If elected to the Security Council, we will advance issues which require greater attention from the Security Council: crisis prevention and resolution, the link between climate and security, the existential importance of human rights for security, the involvement of women in peace processes, the protection of children in armed conflicts, and issues of global health in relation to peace and security.

Crisis prevention and stabilization are important components of our foreign policy. Our approach overlaps to a large extent with the Secretary-General’s reform agenda, especially on the guiding principle of prevention.

Severe and widespread human rights violations are not only symptoms of conflict. In fact, they are often what triggers conflicts in the first place. Focusing on human rights in security policy is therefore an important part of crisis prevention and response. The Security Council has an important role to play here. It must integrate human rights as a core aspect in its mandates.

Equal participation of women is a key element of sustainable peacekeeping. Germany will therefore place particular emphasis on implementing, expanding, and anchoring the “Women, Peace and Security” agenda on the Security Council.

We are concerned by rising sea levels and by desertification in areas inhabited by millions of people. Such developments are responsible for significant human suffering and lead to resource conflicts and migration movements which have the potential to destabilize entire regions. The Security Council must address these issues.

A lesson from the Ebola and Zika crises is that pandemics cannot be handled by the health sector alone. Health risks and weak health systems can destroy societies, destabilize countries, and significantly deteriorate relations between nations. Different actors and agencies must work together in the response. We understand global health as an integral part of foreign policy, especially with regard to security matters, and want to bring these concerns to the Security Council.

Showdown on the East River

On June 8, 193 UN member states will decide in the General Assembly which five countries will be elected to the Security Council for two-year terms. Germany is competing with Belgium and Israel for one of the two seats allotted to the Western and Others Group (WOEG), which means that one of the competitors will leave empty-handed. A two-thirds majority of present and voting member states is required to be elected to the Security Council. If all states are in attendance, this amounts to 129 votes.

In the summer of 2016, former Foreign Minister Frank-Walter Steinmeier officially opened Germany’s campaign for a non-permanent seat. Since then, the German government has sought votes from member states in New York and in capitals around the world on its platform of peace, justice, innovation, and partnership.
Although campaign coordination is in the hands of the German Foreign Office, a successful candidacy is the shared responsibility of the entire German government and needs support from parliament.

Germany will also play a larger role to ensure EU solidarity at the United Nations. The paradigm shift in US foreign policy has consequences on how EU partners in New York will vote. More than ever, the EU must speak with one voice. Germany will be able to play a mediating role more effectively if we are represented on the Security Council starting in 2019. If elected, we would seek closer cooperation with France as one of our main partners.

In our complex world, the United Nations is a tried and true platform to develop solutions to our most pressing problems in dialogue with member states. The United Nations cannot perform miracles, but it is often the last hope we have for peace and security.