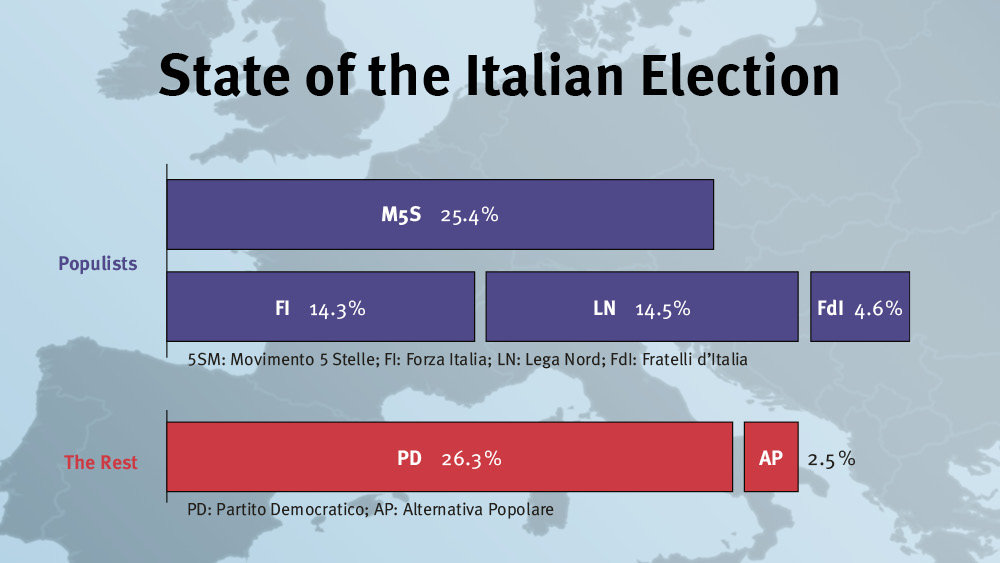 No rest for the weary. Emmanuel Macron’s victory in French elections back in May was supposed to grant Europe a much-needed respite from the march of the populist. The only election still to come was in Germany, and with both major candidates committed to the future of the European Union, the chances for upheaval in Berlin seemed slim.

Europe should prepare for a more difficult relationship with Rome, whether the country leaves the union or not. The Five Star movement, founded by stand-up comedian Beppe Grillo, is explicitly euroskeptic and demands that Italy leave the euro. It has also advocated the country’s withdrawal from the passport-free Schengen travel area, the expulsion of immigrants, and turning away refugees who arrive by sea.

Meanwhile, the center-right is led by Silvio Berlusconi – yes, that Silvio Berlusconi. The 81-year old four-time former prime minister (his last stint was 2008-11) has recently made pro-European noises – even expressing his support for the deeper economic and defense integration suggested by Macron – but his party, Forza Italia, would govern with the far-right, anti-European Lega Nord and the nationalist Brothers of Italy.

There is one thing might save the EU from having to deal with a populist party in control of one of its largest economies: a law passed this year called the “Rosatellum”. Designed to finish the electoral overhaul begun by Matteo Renzi before he resigned last December, the Rosatellum awards 36 percent of legislative seats on a first-past-the-post system, and the remaining 64 percent proportionally. In theory, this would reward established parties that are able to form large coalitions by giving them a supermajority, while punishing smaller fringe parties. Understandably, the Five Star movement has protested bitterly against this change, calling the law the “anti-Five-Star-ellum.”

One thing is certain: With a former prime minister, media mogul, and convicted bunga bunga connoisseur on the center-right, and 31-year-old waiter Luigi Di Maio at the head of the Five Star movement, Europe is in for an exciting campaign season.