Four of the five parties that make up Finland’s current government are led by women. But does that mean the Nordic nation is a beacon of equality? 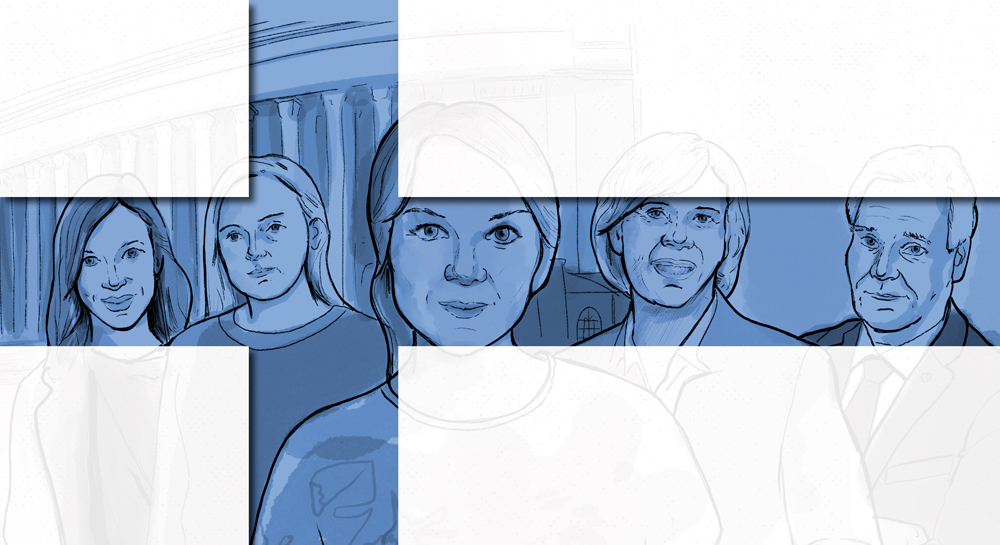 Maybe it’s a sign I’ve lived in Finland too long that I’m pleasantly puzzled by the reactions of visitors to encountering a society that’s putting its best foot forward in terms of gender representation.

A newly arrived EU diplomat told me over lunch recently that they were surprised at how gender-equal Finland seemed. And last month a senior Council of Europe official said they’d been taken aback—in the nicest possible way—that most of the interlocutors at ministries and NGOs were women.

So it barely caused a ripple in Finland’s fairly small political pond in September when Katri Kulmuni, a member of parliament representing Lapland, was elected leader of the Center Party.

With Kulmuni, four out of the five parties in Finland’s red-green coalition government are headed by women. The Swedish People’s Party has Anna-Maja Henriksson; the Left Alliance is led by Li Andersson; and the Greens by Maria Ohisalo. That leaves the Social Democrats as the only government party headed by a man—Prime Minister Antti Rinne.

On the opposition benches, the Christian Democrats also have a female leader, Sari Essayah, and only two other parties in parliament are led by men: the center-right National Coalition Party, and the nationalist Finns Party (perhaps not coincidentally, they’re also the only two parties never to have had female leaders).

The only gender-related news that got the political classes talking this summer was the nomination of former Social Democrat leader, Jutta Urpilainen, as Finland’s next EU Commissioner—and then, only because it seemed almost inconceivable there had never before been a female commissioner from the progressive Nordic nation.

So when searching for the perfect Finnish word to describe the phenomenon of having so many female political leaders, I realized there wasn’t one.

Because, in Finland at least, it’s not a phenomenon.

In fact, it’s politics as usual—or normipolitiikkaa—as the Finns might say.
It’s normipolitiikka now thanks to a generation of female politicians who came before the current crop. For twelve years, Finland had a female president in Tarja Halonen—she had previously served as foreign minister; the world’s first female defense minister in Elisabeth Rehn; and two previous female prime ministers as well.

If anything, there’s a gender imbalance in favor of women in the current government, with eleven female ministers—including Kulmuni who does double duty as Deputy Prime Minister and Minister for Economic Affairs—and only eight men.

Maybe it’s just that Finland broke through its gender glass ceiling before other countries did, which makes it seem remarkable to some that there are so many female party leaders. After all, there were long decades in the 1970s and 1980s without much meaningful female representation in senior government at all. Either way, in 2019, it just seems par for the course.

However, Finland’s picture perfect postcard image starts to fray at the edges when you look at representation beyond front line politics.

Yes, there are plenty of women involved in city and municipal politics, and there are an equal number of female and male Finnish ambassadors representing the country overseas. But when it comes to the world of business, Finland falls far behind.

A new anthology out this month by Anu Kuistiala, a former senior journalist and manager at Finland’s MTV3 commercial television channel, compiles stories of female leadership. Kuistiala notes that women account for only around 7 percent of CEOs at Finnish listed companies, and fewer than one in three of all business executives in Finland are female.

Then there’s the gender pay gap. The average annual income of Finnish men is 17.4 percent higher than that for women—due, Kuistiala says, to girls still choosing stereotypically “female” career paths and not having too many visible Finnish role models in the world of business or STEM to inspire them.

The examples are definitely there—the head of public broadcaster Yle is a woman; the new CEO of Finnish-Swedish paper giant Stora Enso is a woman; the incoming head of Helsinki-headquartered Nordea Bank is a woman—and plenty more besides.

It’s just that they’re outnumbered and less visible to the public than men.

No Ethnic Mix in the Public Service

The other really obvious area where Finland fails at balance is when it comes to the representation of its immigrant, minority, or ethnic-background population.

Look around the capital city region in particular and you’ll see an increasingly diverse population. In Finland’s second largest city Espoo, an estimated 70 percent of newcomers are non-Finns.

But if you look at the police, fire departments, newsrooms, civil service, diplomatic service, or politics, you won’t find much representation of those with different ethnic backgrounds at all.

The staff who respond to 112 emergency calls, who process the tax returns, who work in the ministries, who are the face of Finland in parliament or embassies do not look like the population they are supposed to serve.
Some good efforts are being made: the Helsinki Rescue Department has worked hard to recruit people from immigrant backgrounds; and in local politics, Helsinki City Council has been increasing minority diversity.

One Step Done, Two to Go

But more work needs to be done not only to encourage immigrant-background candidates to get involved in politics, but also for the public to vote for them.

At Finland’s spring general election there were more candidates with minority backgrounds than ever before running for parliament, mostly from parties on the center and left of the political spectrum.

Unfortunately, the two sitting lawmakers with immigrant backgrounds didn’t make it back into parliament, although the Green party’s Bella Forsberg from the Central Finland city of Jyväskylä and Social Democrat Hussein al-Taee from the southern Uusimaa region both got elected.

So two out, two in, and only a slight advance in overall minority numbers as an indigenous Sámi lawmaker was also elected.

As far as politics is concerned, it is mission accomplished on gender equality. But there’s still a long way to go to get meaningful representation of minorities at national level.

And excepting some bright highlights in the world of business, Finland must do more to encourage female and immigrant-background participation in the boardroom as well, or the very real successes for political gender equality—normipolitiikkaa—will start to sound a little hollow.