France is overtaking Germany when it comes to relations with Russia. But only if both countries work together can Europe hope to deal successfully with Moscow. 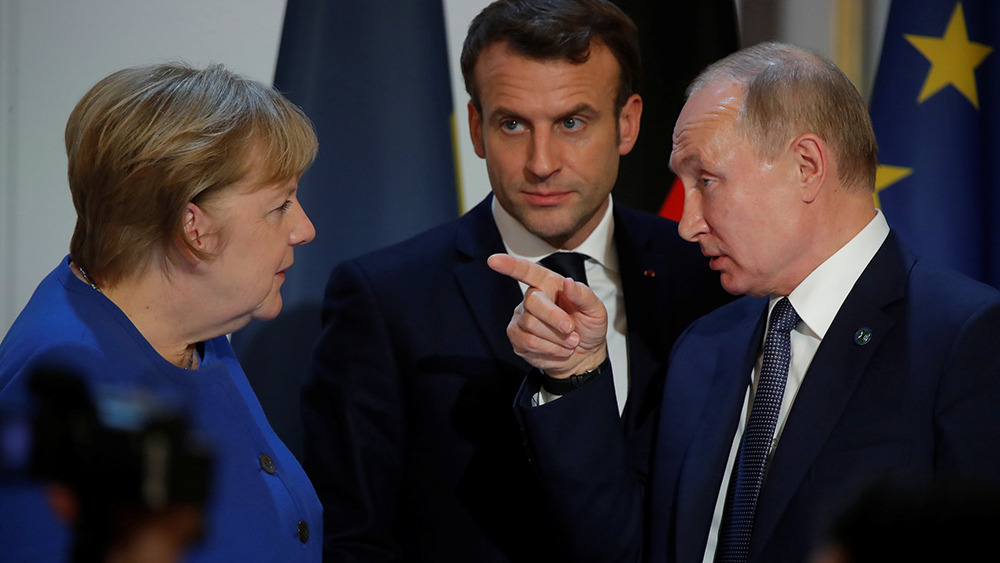 When it comes to Europe’s Russia policy, most of the impetus seems to be coming from Paris these days. For six months now, French President Emmanuel Macron has been setting the agenda. In August he invited Vladimir Putin to a bilateral meeting at Fort Brégançon ahead of the G7 summit, followed by an exchange at ministerial level between Paris and Moscow. Meanwhile, the most recent meeting of the Normandy Format—which brings together France, Germany, Russia and Ukraine to discuss the ongoing conflict in eastern Ukraine—took place in Paris in December 2019. And November 2020 marks the 30th anniversary of the Charter of Paris for a New Europe—an occasion that Macron would like to use for talks about a new European security architecture. Paris, Paris, Paris: France is in the fast lane to Moscow.

This is a new and unfamiliar situation for Germany. Since the beginning of the Ukraine conflict six years ago, it was Berlin that defined Europe’s position towards Russia and ensured cohesion and a hard-won consensus in the EU. However, France is now attempting to redefine this consensus and by doing so is overtaking Germany, or so it seems. Is it time for Berlin to modify its policy towards Russia? Has Germany perhaps held on to its previous “post-2014” approach to Moscow for too long?

Traditionally, Germany has always been the driving force in Europe’s relations with Russia. The German-Russian special relationship flourished after reunification and the end of the Cold War. The early 2000s, after Putin’s election and when Gerhard Schröder was still chancellor, is regarded by some as the “golden age” in relations between Berlin and Moscow. However, this closeness has often given rise to mistrust, especially among Central and Eastern Europeans: during this period, Germany was happy to leave it up to the EU to criticize Russia.

In French politics, on the other hand, Russia only really played a role at times when France remembered at its own great power ambitions. This was the case during the 2008 war in Georgia, when then President Nicolas Sarkozy—on behalf of the Europeans, but on a French mission—negotiated the ceasefire between Tbilisi and Moscow. In the Ukraine conflict, France left the leadership to Germany: President François Hollande was neither striving for proximity to Russia nor looking to project French power. Macron is now returning to the same pattern as Sarkozy. And in doing so, he is following the assertion of Charles de Gaulle: “France cannot be France without grandeur.” This includes a positive relationship with the other great power on the continent: Russia.

A German Lack of Direction

Up until the Ukraine conflict, German policy towards Russia was guided by three principles: reconciliation, integration, and rapprochement. Basically, it was a variation on the Ostpolitik theme: from “change through trade” to “rapprochement through interdependence” and “partnership for modernization.” The longer Berlin adhered to this approach, the louder the accusations of German naivety towards Russia became. The annexation of Crimea and the covert war in eastern Ukraine marked a turning point, leading to a short and medium-term reorientation: Russia policy now consisted primarily of “holding the line” and defending common European positions: extending sanctions, implementing the Minsk agreements, and preventing a sell-out of Ukraine—especially in the form of a “grand bargain” between Trump and Putin.

There was a path dependency to Germany’s Russia policy before 2014 remained. Which is why, despite all the political and economic doubts, Berlin stuck with the construction of the Nord Stream 2 pipeline. From the perspective of its supporters, it was important not to sacrifice the last pillar of the German-Russian special relationship: after all, the gas business with the Soviet Union had functioned reliably even at the height of the Cold War. That is why it is still considered a stabilizing factor in East-West relations today. For critics, Nord Stream 2 is the pivotal issue that could demonstrate a serious change in German policy towards Russia. There is no doubt that Berlin has massively underestimated the political consequences of continuing with the construction: Merkel’s argument that a Russian gas molecule remains a Russian gas molecule, regardless of whether it arrives via Ukraine or the Baltic Sea, has not convinced the US Senate. The pipeline will now probably have to be completed by Russia on its own.

German policy towards Russia thus currently consists of little more than sanctions on the one hand and a commitment to Nord Stream 2 on the other, coupled with an effort to maintain political dialogue, which often leads to frustration—whether in the Petersburg Dialogue or the High Working Group on Security Policy at the level of senior ministry officials. Moreover, the contrasting approaches from the period before and after 2014 make this policy very difficult for European neighbors to understand. In short: Berlin is treading water in its Russia policy. What is missing is a long-term strategy.

Russia is only 13th (based on total revenues in 2018) on the list of Germany’s most important trading partners, and under the current conditions, there is little potential for growth. It is therefore unclear on what basis German-Russian relations will develop over the next ten to 15 years. At the same time, a kind of “Russia fatigue” has started to take hold in Berlin. For example, the German EU Council Presidency, which starts in July, is setting very different priorities with an EU-China Summit and an EU-Africa Summit. Even a summit on the Eastern Partnership did not make it onto the German agenda, but will take place in Brussels in June instead.

It seems that Germany’s hopes for a positive change in relations with Russia have been dashed. It is the end of a strategic partnership; at the same time, German policymakers are reluctant to see Russia as a strategic adversary, as some other European member states are advocating. Such an approach would be difficult to communicate to the German public. For them, the relationship with Russia is an emotional one. According to a survey conducted by Körber-Stiftung, Germans are consistently in favor of more cooperation with Russia. Moreover, the concept of “decoupling” or “disentanglement” is not popular in German foreign policy, which is based on the principles of multilateral cooperation and collaboration. And Russia is now indispensable in many international policy fields.

Meanwhile, Macron is hoping for cooperation: he wants to form a common front with Russia in order to survive in a new world order marked by US-China rivalry. According to Macron, Europe will not be able to assert itself as a great power if it cannot get along with its biggest neighbor on the continent. The German approach is much more pragmatic: dialogue with Russia—especially in international crises such as Libya, Syria or Iran—is still urgently needed. A geopolitical “alignment” with Russia à la Macron seems, however, absurd. Russia and China each remain challenges in their own right.

Germany, unlike France, cannot take a great power approach to Russia. At the same time, however, Berlin should not leave Russia policy entirely to Macron, but should identify areas in which it can actively advance the Russia policy agenda together with France.

The five Russia principles that the former EU High Representative Federica Mogherini set out in March 2016—the implementation of the Minsk agreements, the strengthening of relations with Russia’s neighbors, resilience, selective cooperation, and civil society cooperation with Russia—are still valid, but they need to be reviewed. An exchange with Russia on European security would be in France’s interest— in the full knowledge that when it comes to European security, Russia is part of the problem, for example because of its violation of the INF Treaty, and only to a limited extent part of the solution.

Putin’s Russia Is Here to Stay

Macron is right to have placed the issue of arms control and strategic stability high on the Franco-Russian “agenda of trust and security” led by diplomat Pierre Vimont. And he is right to argue that European security cannot be decided between the US and Russia and over the heads of Europeans, as happened with the end of the INF Treaty. However, a sense of proportion is required: the Russian offer of a moratorium on the stationing of intermediate-range missiles, which Macron would like to talk about, is a rather unhelpful suggestion if NATO partners believe that such missiles have already been stationed by Russia. Overall, however, Germany, working together with France, can make a useful contribution to this issue.

Macron has also already announced that he will attend the celebrations of the 75th anniversary of the end of the Second World War in Moscow in May 2020. Such symbolic gestures form an important part of France’s policy towards Russia. Should Chancellor Angela Merkel decide to follow Macron’s example, she will have to walk a fine line between remembrance on the one hand and rejection of Russian historical revisionism on the other. The politicization of history for the purpose of constructing a positive Russian great power idea and rehabilitating Stalin’s leadership reached a new high point in a speech President Putin gave late last year. History policy is thus also a field in which Germany—ideally together with France—should take a clear stance.

Europe’s Russia policy can only be shaped jointly and not by France alone. Germany should help define the framework conditions of the new French initiative on Russia: inclusivity before ambition, unity before great power. Without the support of other Europeans, Macron’s Russia policy will have little chance of success—and the skepticism in Central and Eastern Europe is already significant. Macron’s visit to Warsaw was a first step towards confidence-building, and others must follow. It is only by working together that the EU can exert a constructive influence on Russia and, if necessary, counteract destructive policies.

Realistically, however, one must accept the fact that there is little prospect of any change within Russia. The constitutional amendments now being pushed through in Moscow point to a continuity of the form of rule and of the ruling elites after 2024, the end of Putin’s current term of office. Whether the Russian president chooses the “Kazakh succession model,” whereby he steers the fortunes of the country as the éminence grise in the background, or whether he finds an alternative model—Putin will in all probability not leave the political stage. This makes it all the more important for the EU to review its principles for cooperation with Russia and ensure they are given a long-term orientation. Neither France nor Germany can achieve this alone.