New CDU leader Annegret Kramp-Karrenbauer has often been called an “Angela Merkel 2.0”. In fact, AKK is likely to steer Germany’s conservatives back to the right. 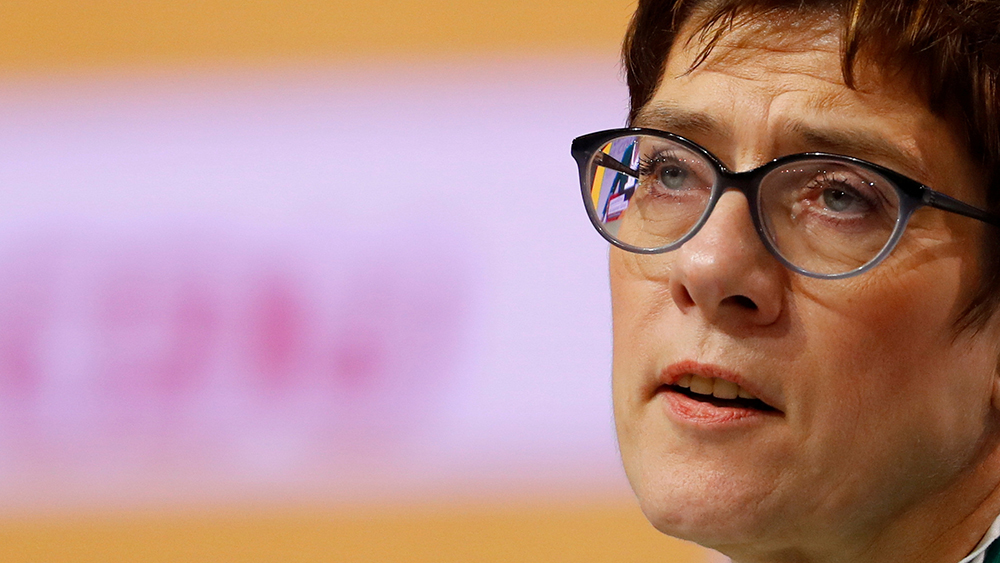 As soon as an extremely relieved Annegret Kramp-Karrenbauer had ascended the conference stage in Hamburg on December 7 and accepted the leadership of the Christian Democratic Union (CDU), it was obvious what Germany’s right-wing political establishment made of her. Old men, their yearning for simpler times written in little veins across their pink cheeks, were elbowing each other aside to find a TV camera into which they could bluster and denounce the failure of nerve among the great Christian conservatives.
The attack lines were foreshadowed, and the far-right Alternative for Germany (AfD), to which the CDU has been bleeding votes, was getting ready for a field day. In fact, AfD Bundestag member Gottfried Curio had already come up with an appropriate gag: “AKK,” he told the chamber just over a week earlier, could only be short for “absolut konstante Katastrophe” (“an absolutely constant catastrophe”).

Not another Angela Merkel! Not another aloof, careful, centrist prevaricating compromiser. Not another woman! By shying away from Friedrich Merz, the political embodiment of the alpha-male DAX boardroom, the party of Konrad Adenauer and Helmut Kohl had missed the chance to carve out a clear new path (or at least re-carve a weed-ridden old path).

But there are more complex interpretations. Those struggling to spot the differences between Annegret Kramp-Karrenbauer and her predecessor might want to go on YouTube and watch one of AKK’s annual performances as “Cleaning Lady Gretel” in the carnival in Saarland, the state she governed for seven years.

They might find it more painful than funny (the forced mirth of western Germany’s Karneval might be the tradition that forever calcified the country’s comedy reputation). Still, watching the sight of a top conservative in an apron and broom delivering a solid half-hour of slapstick gags might also help one understand why a majority of CDU delegates picked her in Hamburg, and why many may even have thought of her as a more amenable leader than Merkel herself.

Kramp-Karrenbauer is more “approachable” than the chancellor, according to Eva Quadbeck, journalist and co-author of a rather well-timed biography published in October. “She’s the kind of woman you could have a chat with if you saw her in the supermarket,” she said.

More than this, this Catholic mother-of-three holds all the right values for the CDU: she expressed her opposition to gay marriage in 2015, and is against abolishing the infamous Paragraph 219a from Germany’s criminal code, which forbids advertising abortion. This has already been a source of tension with the Social Democratic Party (SPD) in the government coalition.

In fact, suggested Olaf Boehnke, political analyst at Rasmussen Global, Merkel and AKK may already have agreed to play out a “good-cop, bad-cop” routine. While Merkel concentrates on her international duties and maintains a relatively liberal course to keep her coalition together, Kramp-Karrenbauer, with no seat either in the cabinet or the Bundestag to actually affect government policy, will make all the right conservative noises on domestic issues to keep the party on her side while she awaits her turn.

Kramp-Karrenbauer’s record also suggests she has “more courage to take risks than Merkel,” Quadbeck argued. In 2012, the then newly-appointed Saarland state premier, impatient with infighting in the allied Free Democratic Party (FDP), dissolved her coalition and called an early election, even though polls had the CDU neck-and-neck with the SPD. “Merkel advised her against this, quite vehemently in fact,” Quadbeck said. “But she did it anyway, and won the election.”

To show the boss that this was no fluke, Kramp-Karrenbauer repeated the trick at the next Saarland election in March 2017, trouncing the SPD with a full 40 percent of the vote, a victory that was credited with bringing the campaign train of SPD chancellor-candidate Martin Schulz to a grinding halt. Merkel once again took note, before securing her own victory over the Social Democrats in September.

If AKK can help pull the same results off in next autumn’s state elections in eastern Germany, even the CDU’s old-school traditionalists will surely revere her. The AfD is currently claiming close to a quarter of the electorate in Brandenburg, Saxony, and Thuringia. According to Boehnke, that means that Kramp-Karrenbauer will have to prioritize the issues of migration and border controls and look significantly tougher than Merkel.

“She has to shape the profile of the CDU as the one party that is looking for regulation of migration,” said Boehnke. “From a CDU perspective, it’s about limiting the damage of [the refugee influx in] 2015, and trying to win back the supporters who left for the AfD.” For Europe, “that would mean taking all the immigrant quota issues off the agenda.”
“She pretty much backs what Merkel is already doing at a European level,” Boehnke added. “She is definitely a European by passion, but she has to favor the national interest over European interest.”

Kramp-Karrenbauer is already hardening her rhetoric on immigration. She said in November that she would like to see Germany’s rules on dual nationality re-examined—in other words, she would potentially force the grandchildren of immigrants to choose to own one passport only.

Nor is AKK above a bit of the kind of right-wing populism that Merkel has conspicuously avoided: on the campaign trail in November, Kramp-Karrenbauer criticized the fact that some kindergartens had taken to calling traditional children’s St. Martin’s Day processions simply “lantern processions” rather than using the Christian term. “That’s not tolerance, that’s self-diminishment!” she told a local CDU gathering in Berlin, and “no part of her speech got more applause,” DER SPIEGEL reported.

These aren’t necessarily just populist gestures. Indeed, all of Kramp-Karrenbauer’s public statements suggest that, as chancellor, she would steer Germany back onto the pre-Merkel paths that those old CDU conservatives prefer. According to Quadbeck, AKK is “very much in the tradition of Helmut Kohl and his west-orientated world view, while Merkel had adopted a much more multilateral world.”

Ultimately, all this is about securing the future of the CDU, which is currently polling nationally at just under 30 percent. As Boehnke put it: “If Kramp-Karrenbauer can guide the CDU back to 36 percent, she’ll be good to go for the chancellery.”