The price of oil has collapsed once again, causing chaos in the market. The clean energy sources of the future will have their own tricky oversupply problems. 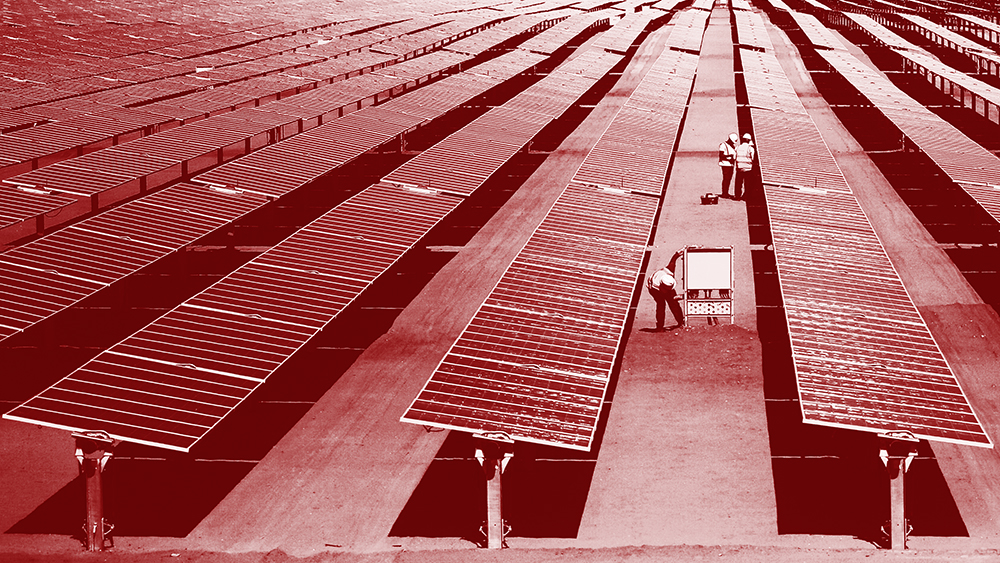 With so many cars trapped at home with their owners, oil prices have fallen to the lowest level in decades, triggering crisis meetings of OPEC plus. The price of oil has even dipped below zero at times—producers will rather pay someone to take the oil off their hands than pay someone to shut down their wells.

The problem of oil oversupply is about as old as the industry itself. Long before Saudi princes and Russian presidents were arguing over supply cuts, the free market-loving US state of Texas was limiting local production to support higher prices. Even today, the industry’s solutions are sometimes, well, crude. When shale drillers produce superfluous natural gas along with their oil, they simply burn it in the sky in a practice known as “flaring”.

In order to mitigate climate change, low-carbon sources of energy like solar power will have to supplant oil products as our most important source of energy. But new energy sources are no less vulnerable to the oversupply problem. In fact, the more renewable energy in an electricity system, the trickier things can get.

Brimming over with Sunlight

The coronavirus lockdowns are turning excess electricity into a real problem. Chinese coal miners are calling for production cuts, while the United Kingdom is preparing to pay windfarms to shut down on short notice to avoid congestion on the grid and blackouts. Electricity prices are down across the EU, too. The basic problem for electricity is the same as that for oil: lower demand means higher supply and falling prices.

But electricity, unlike oil, cannot sit in a tanker or pipeline until prices recover. In the words of Gretchen Bakke in her book The Grid, “the grid must be balanced; consumption must always match production… [Electricity] cannot be boxed or stored or shipped. It is always used the same instant it is made.”

Although it is possible to store electricity as energy that can generate electricity later, for example by pumping water from a low area to a high area and allowing it to rush through a turbine when needed, energy storage is very limited today: at any given moment the EU can generate 20 times more electricity than it has the capacity to store. The vast majority of that storage is in the aforementioned hydropower, not batteries.

Humans have traditionally worked around these limitations by storing fuel (coal, gas) and burning it to create electricity as needed. The problem is that producers have no control over the “fuel” for solar power, the sun’s rays. While the danger of solar undersupply is well known—how to store solar power to use it at night or in dark winters?—the reverse problem of oversupply can arise when solar is at its most effective, soaking up the noon sun while consumers are in the park.

Sometimes solar power is worth less than nothing. Germany occasionally exports small amounts of power at negative prices to neighboring countries; this is happening more and more frequently as renewable generation expands. In fact, due to the successful expansion of wind power in the North Sea, Germany has had to install devices called “phase shifters” at its borders to prevent electricity from spilling over into the Dutch or Polish grids, overwhelming them with cheap, clean power.

Too Much of a Good Thing?

Yet just as little oil is actually delivered for -$1, negative electricity prices don’t necessarily mean consumers get paid for turning on the toaster; rather, they are a signal to grid operators that they should shut down some electricity generation because there is nowhere to send the power. Coal or gas power plants are typically the first to go because they generally have higher operating costs than solar, where the fuel costs nothing. Having to turn these plants down or off and then on again (“cycling” in the jargon) is a huge pain for their owners, who lose out on revenue and sometimes damage their boilers and turbines in the process.

Sensible government policy to support the expansion of renewable power can further complicate things for grid operators and owners of other types of power plants. The foundational law of Germany’s Energiewende, the Erneuerbare-Energien-Gesetz (EEG), gives renewable power priority access to the grid and requires grid operators to pay a certain price for it regardless of demand. Many US states let owners of residential solar panels reduce their bills by the amount of energy they send to the grid, no matter how little it is worth at the time. US solar power producers whose income is protected by government regulation can sell their power for next to nothing and drive competitors out of business, whether their emissions are low (nuclear) or high (coal).

In fact, because the sun is so fickle, solar power imposes considerable costs on the whole system. The 2019 OECD report “The Costs of Decarbonization” compared a system with 50 percent renewable power to a base case system that runs entirely on fossil fuels and found that the renewable-heavy system increased total system-level costs by 42 percent. That’s because the renewable-heavy system needs to invest more to avoid both undersupply, e.g. by keeping some coal or gas plants on standby, and oversupply. (None of this is a reason to stick with fossil fuels, which impose much higher costs on society as a whole than do renewables.)

A Victim of Its Own Success

The public might have little sympathy for operators of coal-burning plants who are losing profits, but the oversupply problem is increasingly coming back to bite solar itself. The problem is “value deflation.” As Varun Sivaram explains in his book Taming the Sun, “even if the cost of solar falls as a result of increasing deployment, its value might fall even faster. That’s because the more solar is installed, the less the electricity it generates in the middle of the day is needed.” In other words, the first installed solar panel is very useful and easy to integrate into the system, but the latest one might only add electricity when the system needs it the least, when all of its predecessors are also generating.

The COVID-19 crisis has accelerated value deflation in markets with a high penetration of solar power. For example, in California, stay-at-home orders have depressed electricity demand from commercial and industrial users. As a result, the grid operator has been forced to curtail—or throw away—record quantities of solar and wind power that are worthless when generated in excess of sagging demand.

What to do about oversupply? There might not be an Organization of Solar-Exporting States to regulate production, but there are two approaches to keeping electricity supply and demand in balance.

The first is to improve energy storage so there is somewhere to put excess supply. The price of batteries is falling fast, and electric cars are essentially batteries on wheels. The more electric cars there are on the roads, the more storage there is for solar power. Another option is to use solar power to split water molecules and produce hydrogen, which, like oil, can be stored as a dense liquid fuel: in supertankers, in national strategic reverses, in pipelines, and in the hydrogen car in the garage. Finally, there are innovative possibilities for storing solar power as heat, like the concentrated solar plants that use mirrors to concentrate the sun’s rays on a giant tank of molten salt.

The second is to increase potential demand. Sivaram, until recently the Chief Technology Officer of ReNew Power, India’s largest renewable energy company, highlights in his book a number of clever ways to do so, like using excess solar power at desalination plants to turn ocean water into drinking water, or heating hot water tanks during the sunny afternoon so they are ready for evening showers. Major institutions are already trying to shift demand to match supply. The EU Clean Energy Package requires power companies to offer “dynamic pricing” tariffs, so that customers will be aware of the best time to charge their car or turn on the dryer. Google announced in late April that its data centers will work harder when the sun is shining.

It is also essential to increase the size of electricity grids by building interconnectors to allow the transfer of electricity from place to place. If the grid is large enough, there should always be a customer somewhere: solar farms in Spain could power dining room lights in Hungary, where the sun would already be going down.