The right-wing populist Alternative für Deutschland, or AfD,  has struck a more moderate tone in Germany’s parliament than expected. But there is still plenty of reason to be concerned. 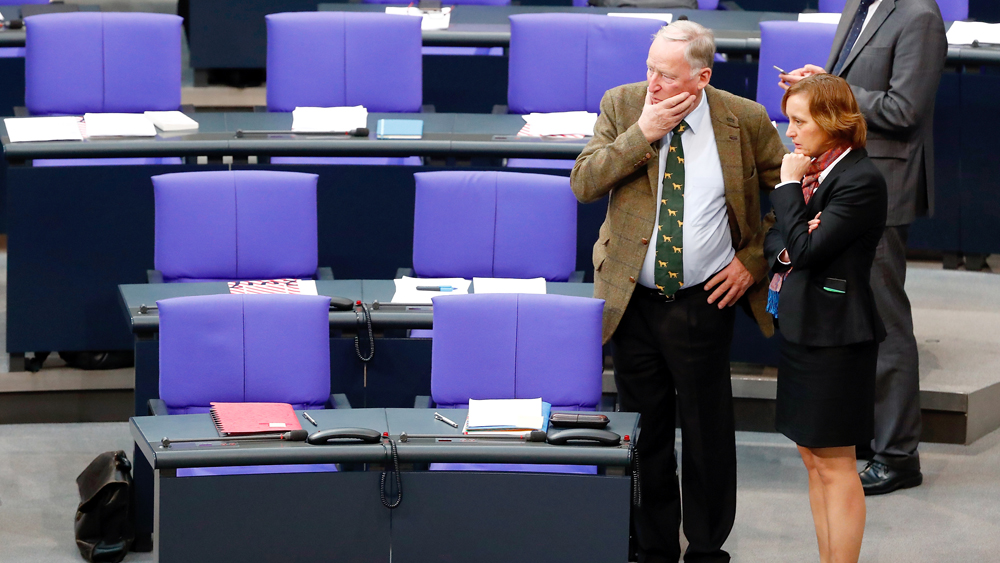 September 24 marked a watershed moment in German politics: a right-wing populist party entered the Bundestag for the first time in post-war history. There was much soul searching and hand wringing in the lead-up to the first joint parliamentary session, but the AfD’s 92 newly minted lawmakers (not including its leader, Frauke Petry, who abandoned ship because the party had moved too far to the right) managed to build a parliamentary group, appear in the Bundestag chambers, and deliver a speech without sparking controversy. That, by AfD standards, is news in itself.

It was the AfD, after all, that continuously employed highly controversial and divisive rhetoric on the campaign trail, denigrating Germany’s justice minister by claiming he was the result of “inbreeding” in his home state of Saarland, and branding Chancellor Angela Merkel an “old shrew.” The party also hired an American creative agency to design an aggressive online campaign strategy, including an ad that depicted a bloody set of tire tracks, referring to the series of Islamist terror attacks carried out with vehicles. The slogan: “The global chancellor’s tracks across Europe.”

That crude, populist behavior was noticeably absent in the Bundestag’s first session on October 24. Most of the AfD’s lawmakers appeared to blend seamlessly into the parliament’s tapestry, difficult to distinguish from their counterparts from the mainstream parties. Only their pride in being MPs set them apart from veteran politicians: AfD lawmakers posed for pictures and exalted their success on Twitter and Facebook. But they were not disruptive – certainly not in the way the other groups had feared.

What was striking, however, was the AfD’s reticence in moments where the rest of the Bundestag applauded – when Holocaust survivor Inge Deutschkron was welcomed from the podium, for example, or when MPs congratulated the newly elected president of the Bundestag, Wolfgang Schäuble.

It highlighted how the AfD perceives itself as the true underdog – a systematically oppressed group that successfully fought for a spot at the table against a powerful establishment. While the majority of German society is outraged over the populist party’s treatment of minorities, the AfD is in turn outraged by that very reaction. When Hermann Otto Solms, an MP from the liberal Free Democrats, warned in a speech against rules that “stigmatize and exclude,” AfD lawmakers applauded vociferously because they see themselves as the victims of such exclusion. Solms’ appeal to take a stand against hate speech and propaganda, however, did not garner a reaction: the AfD does not identify itself as a propagator of either.

In its first motion in the new Bundestag, the party demanded that the Alterspräsident, or chairman by seniority, be elected by age. The oldest member of parliament traditionally makes the first speech in a new session. But Germany’s mainstream parties had hastily changed the election process after realizing the oldest MP would be an AfD lawmaker who has publically trivialized the Holocaust.

That prompted AfD parliamentary group leader Bernd Baumann to hold a speech that once again revealed the AfD’s character as not a party of reason, but one of provocation and half-truths. Baumann claimed that the mainstream parties’ barring of an AfD parliamentarian from the seniority post could be compared to the time when Nazi leader Hermann Göring banished Marxist Clara Zetkin from the Bundestag and prevented her from speaking. It was an erroneous comparison as many German media pointed out: Göring had indeed gotten rid of the chairman by seniority position, but he did not prevent Zetkin from speaking. By then, she was not even a member of parliament anymore. Instead, Göring actually blocked a member of his own group from taking the post.

The incident is an important reminder that parliamentarians will have to remain vigilant and alert during AfD speeches to check facts and react quickly. They did not do so during Baumann’s speech, allowing his half-truth to stand. He will certainly not be alone in pushing the boundaries of what is acceptable. According to the Berlin daily Tagesspiegel, 15 AfD parliamentarians created a closed Facebook group that has already become a platform for vicious racism and vile hate speech. One member posted a picture of a pizza box with the image of Anne Frank on the cover; the caption, reportedly, read “Oven-fresh, light, and crispy.” Some 50 AfD lawmakers from state and federal levels are part of the closed group, yet when news of its existence came to light, there was no outcry. The lack of outrage has become commonplace.

The AfD’s eerie silence in the Bundestag does not mean other parties can let down their guard. In the coming months, the government will be formed; the committees will take up their work; debates on content will begin – and AfD lawmakers will undoubtedly reveal their true colors. In his speech, Bernd Baumann claimed his party would usher in a “new era in the Bundestag” where mainstream political groups would no longer “decide everything among themselves.” The same holds true for the AfD as well. The public will be watching their words and actions closely.