Under Sebastian Kurz’ leadership, Austria’s right-wing government has emerged as a center of conservative power in Europe. But the borders between right and extreme right are growing porous. 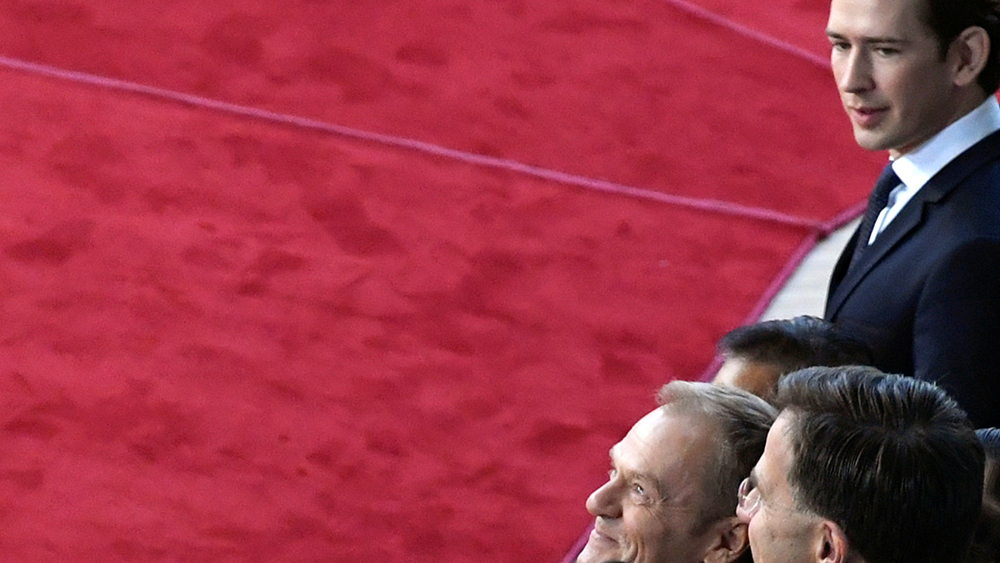 Charismatic, young, and still remarkably popular at home―and abroad: Sebastian Kurz of the right-wing Austrian People’s Party (ÖVP) increasingly sees himself as a mediator between the Europe’s various right-wing movements. His aim of uniting the continent’s right-wing populists under one umbrella has placed Austria in the once-familiar role of axle between East and West.

Before 1989, Vienna was perched just beyond the fringes of the Iron Curtain, serving as a hub for dialogue between the Soviet Union and Western powers; now, it facilitates dialogue between right-wing extremists and the more moderate, traditionally center-right parties across Europe. The Austrian Chancellor has managed to garner respect from right-wing euroskeptic governments in Hungary and Italy and keep the doors of dialogue open to the European establishment in Berlin and Paris, allowing him to serve as a go-between.

At least that’s the image that Kurz is keen to present, repeatedly and with pride, especially since his country took over the rotating presidency of the Council of the European Union in July. The conservative US ambassador to Germany, Richard Grenell, recently dubbed Kurz the “rock star” of the European neocons―and rightly so.

Kurz, however, has taken neoconservatism in Austria a step further: after his party won the largest share in the country’s national elections last year, he promptly formed a coalition government with the far-right Freiheitliche Partei Österreichs (FPÖ) and its leader, Heinz-Christian Strache. The FPÖ secured key ministerial posts, including the foreign ministry, the labor and social affairs ministry, and the transport and interior ministry, where the new minister, Herbert Kickl, has taken a hard line on tightening security in the country. Kickl and the FPÖ are already pointing to their achievements, claiming to have bolstered the police, curbed illegal immigration, and stepped up deportations.

Kurz, meanwhile, has installed a member of his own ÖVP party in the influential finance ministry, and established himself as the face of the Austrian government. Ahead of last year’s vote, Kurz painted himself as the savior of the Abendland, or Christian West—as the man who closed the Balkan Route to migrants and effectively put an end to the 2015 refugee crisis. Now, he’s brought that mantle onto the European stage.

Anti-foreigner sentiments and slogans, once only uttered by the far-right, have now been adopted by Kurz and his government as part of an “Austria First” platform. Only extremely racist, anti-Semitic, or misogynist sentiments remain unpalatable―and they continue to appear on FPÖ platforms. That, in turn, makes Kurz appear as a moderate, center-right leader.

The motto of Austria’s EU Council Presidency is “A Europe that protects,” a page from French President Emmanuel Macron’s book. But unlike Macron, Kurz doesn’t mean protection against unemployment or social inequality, but rather against illegal migration and for more security.

For the Bavarian Christian Social Union (CSU) and other critics of the German chancellor, Kurz is an obliging anti-Merkel, and they appear eager to deepen ties. The German health minister Jens Spahn, a member of Merkel’s own CDU party who is openly critical of her policies, paid a visit to the Vienna Opera Ball with his husband last February; a few months later, Kurz and members of his government hopped on a train to the Austrian city of Linz to meet with the Bavarian government.

So what do these alliances portend? Some observers beliebe he may be positioning himself as a candidate for the EU Commission presidency―possibly for the 2024 European elections, when Kurz will be just 37 years old. The first step would be to claim an important role within the European People’s Party. “The young guns are angling for the EPP leadership,” wrote influential Austrian journalist Thomas Mayer from the left-leaning daily Der Standard. Mayer noted that Kurz’s style of politics was a clear departure from the more traditional, post-war ideals and sense of responsibility that informed Chancellor Angela Merkel’s approach to human rights and refugee policies.

Indeed, a growing number of Austrian media have come to describe Kurz’s politics as a type of “alpine Orbanism,” in reference to the “illiberal democracy” championed by Hungary’s Prime Minister Viktor Orbán. These commenatires and analyses are always accompanied by a stark warning that even well-established democracies like Austria are at risk of back-sliding into semi-authoritarianism. The danger, they point out, stems not only from right-wing, nationalist parties like the FPÖ), but also from centrist parties that have adopted far-right platforms.

One of Kurz’s harshest critics is Matthias Strolz, the long-time leader of Austria’s neocon movement and erstwhile ally of the Austrian Chancellor. In a widely read interview with the Austria Press Agency (APA) in June 2018, Strolz wrote that the “hour of Merkel’s antagonists” had arrived and accused the Austrian chancellor of heading up an “axis of the unscrupulous.” In his stinging rebuke, Strolz called the Austrian chancellor a stooge of right-wing populists, Trump supporters, and Putin loyalists―a wolf in sheep’s clothing, a slick and shiny right-wing populist who rose to a position where he can destroy the European Union from within.

Under the leadership of Heinz-Christian Strache, the party’s chairman and the vice chancellor, the FPÖ has become one of the best-connected right-wing populist parties in Europe, with an alternative news platform―Unzensuriert.at, or uncensored, a media outlet linked to the FPÖ―and deep ties to Russia’s Vladimir Putin, which have grown deeper since the party entered government and gained more legitimacy.

The strategy has been tried and tested in the past: start as an opposition party; build a propaganda platform cleverly disguised as alternative news; take over power of the government and control of public broadcasters; attack independent, critical media outlets. Austria is a prime example of how well this works.

“We tried to take a communication deficit and turn it to an advantage,” the FPÖ’s former general secretary Herbert Kickl once said in an interview. Kickl, now the interior minister, is waging a campaign against critical media.

The extent to which Europe’s right-wing populists are linked was made evident at the 2016 “Defenders of Europe” conference in Linz, a gathering of far-right and anti-Semitic groups. Kickl attended, and leading members of the German right-wing scene were also on hand―including Jürgen Elsässer, editor-in-chief of Compact, a fast-growing nationalist, right-wing magazine in Germany.

Walter Asperl, director of Unzensuriert.at, serves as a member of an FPÖ parliamentary group and has been accused of inciting hatred against Muslims, refugees, and homosexuals.

“A Need For Good Dialogue”

Meanwhile, Russia’s Putin is buttressing right-wing populist, euroskeptic movements across Europe. His United Russia party inked a friendship treaty with the FPÖ in 2016, with Strache paying a personal visit to Moscow to sign. Putin’s much-publicized attendance at Austrian Foreign Minister Karin Kneissl’s private wedding this summer was a potent symbol of this new bond. Images of Kneissl, who was nominated by the FPÖ, curtseying to Putin were beamed around the world and sparked huge controversy. Kneissl argued it was merely a sign of respect for a foreign leader. But the traditional dance reflects the two cornerstones of the Austrian government’s foreign policy―legitimize the far-right and build bridges to Russia.

Kurz was guarded in his reaction to the curtsy controvery, but shortly thereafter, he traveled to St. Petersburg to join Vladimir Putin in opening an exhibition at the State Hermitage Museum―the fourth meeting between the two leaders this year. “There is a need for good dialogue, especially with neighbors with whom there are tensions,” Kurz said in a press conference.

In this way, Kurz assumes the role of a steady-handed pilot steering his crew through a bumpy patch―and in doing so, he racks up points with FPÖ voters well right of the middle. He’s already picked up center-right voters in the national vote with his combination of polite, non-aggressive politics and sweeping security policies. The suave far-right centrist is a role Kurz has now perfected.