Can Theresa May and Jeremy Corbyn agree on a compromise to break the parliamentary deadlock? It seems highly unlikely. 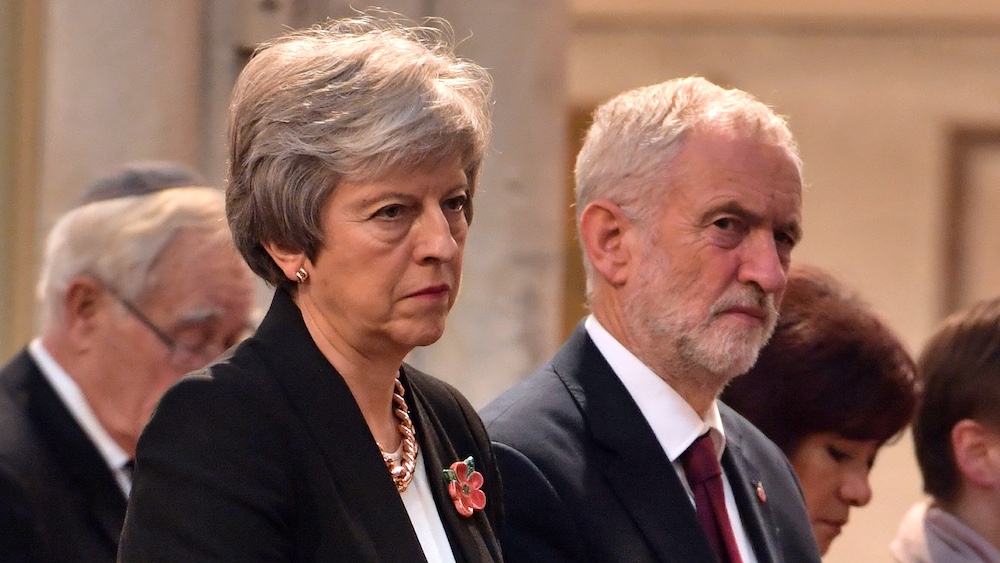 The Brexit deadline of March 29 has come and gone, with no end to the turmoil in sight.

The Withdrawal Agreement negotiated by the British government with its 27 EU partners in Brussels has been resoundingly rejected three times by the House of Commons at Westminster, thanks mainly to the opposition of hardline Brexit rebels on the Conservative side.  Yet no other plan for an alternative Brexit has won a majority. The government is divided, the opposition is divided, and so is the country at large.

Up to one million demonstrators marched in London calling for another referendum, six million signed a petition calling for outright revocation of the request to leave the EU, while thousands of angry pro-Brexit campaigners gathered in Parliament Square to denounce their MPs as traitors for failing to deliver Brexit on time. Passions are running dangerously high. Death threats on social media are a frequent occurrence for many outspoken MPs, and the political establishment is in virtual meltdown.

Parliament has attempted to seize control of the process, but so far with little effect. The prime minister, bitterly criticized by pro-Brexit rebels for her failure to deliver their goal, has promised to resign if they will only change their minds and vote for her deal. Most of them still refused to budge. And the 10 Democratic Unionist party MPs from Northern Ireland on whom she relies to have any majority have declared that she can bring the withdrawal agreement back to parliament 1,000 times, and they will never support it. The irony is that it is a caucus of pro-Brexit rebels, plus the DUP, that have blocked the prime minister’s deal, because they see it as locking the UK to the EU, even after it has left.

Now at last Theresa May has done what she should have done when she lost her majority in 2017—if not in 2016 when the referendum split the nation by 52/48—and reached across the parliamentary divide to seek a compromise with Jeremy Corbyn, leader of the Labour party. Could it break the deadlock and produce a Brexit agreement? It seems highly unlikely.

For a start, there is very little trust between the leaders or the parties. May’s move is seen as a trap by many Labour MPs, who fear that the prime minister is simply trying to get their finger-prints on a Brexit plan that has been entirely dictated by the demands of her divided Conservative party. And it is seen by the Brexiteers on her side as another desperate attempt to win their votes for the Withdrawal Agreement, by threatening a “soft” Brexit compromise instead—or no Brexit at all.

Indeed, by the very act of reaching out to the Labour party, whether the gesture is genuine or cynical, May has further infuriated her rebels and made them more likely to reject her deal. As for winning Labour votes, by promising to resign in the near future she has alienated potential soft-Brexit sympathizers. They fear she will be replaced by a hardline pro-Brexit Conservative leader like Boris Johnson or Michael Gove.

May and Corbyn share one personality trait: neither is naturally pragmatic nor inclined to compromise. Both are stubborn ideological leaders who won their way to the top because of their single-mindedness—May on a platform of controlling immigration, Corbyn as a devotee to a far-left socialist agenda. The difference is that May is obsessed by the need to preserve party unity, whereas Corbyn is a serial rebel against former party leaders.

The second factor compounding the search for a compromise is that neither can be sure of delivering a united party, or enough votes in parliament, to get an overall majority afterwards. They are neither loved nor respected in their own parliamentary party ranks. They are not natural persuaders.

May’s dilemma is that almost anything she might agree with Corbyn would split her party. His top line is to add a commitment to a permanent customs union with the EU, which would do much to avoid the need for a post-Brexit hard border between Northern Ireland and the Irish Republic—something everyone wants to avoid, for fear of destabilizing the peace process.

But a customs union would mean that a post-Brexit government would be unable to negotiate its own bilateral trade deals, which is an article of faith for the Brexiteers. A Norway-style deal involving membership of the EU’s internal market would require British acceptance of free movement, another “red line” for May and many Conservative backbenchers.

If a customs union would be worse for May than Corbyn, another referendum on any deal—now called a “confirmatory vote”—would split both parties. Labour is committed by its party conference to pressing for one, at least as a last resort to break the deadlock, but a vociferous Labour minority is adamantly opposed. Many are Corbyn’s closest allies.

Precisely because a referendum is equally objectionable to both leaders, it might be an acceptable compromise. But May will try almost any other way out before she agrees. So a request to the European Council for a long extension seems unavoidable, even though May says she wants a short one. That is because she is desperate to avoid holding the European elections in the UK at the end of May.

It is not simply a matter of principle. May argues that voters will not understand why they are still electing MEPs when Brexit is supposed to be happening. Her objection is also party political. Both the big parties would probably fare badly in the poll, because of their internal divisions over EU policy. As an election based on proportional representation, it will favor the small parties, both pro- and anti-EU. That is another reason why May will do almost anything to get her Withdrawal Agreement approved before May 22, including a pact with the devil, alias Jeremy Corbyn.

Another escape route from Brexit which both leaders are scared of would be outright revocation of Article 50: a unilateral withdrawal of the UK request to leave the EU. That would be clean and quick. It would simply stop the process. It would remove the uncertainty that is wreaking havoc in the economy. But both May and Corbyn are fearful of a furious backlash from Brexit voters if such a thing were done by parliament, without the cover of a second referendum. The Conservatives would certainly split. So neither is going to take the initiative.

For Corbyn, Brexit is not the most important question. He has always been a euroskeptic, even though his party is heavily in favor of remaining in the EU. In his heart, he would like Brexit to happen. But if it is going to be a mess, he wants the Conservatives to get the blame—and then fight a general election to become the first hard-left Labour leader in 10 Downing Street, implementing a genuinely socialist policy.

On the one hand, he does not disagree with much in May’s withdrawal agreement. On the other, he must keep his party united and keep clear of being blamed for the shambles. Hence his willingness to talk, in the hope of a failure which leaves May appearing more intransigent.

A long extension of the Brexit deadline, contemplated in Brussels, will solve nothing on its own. But it would allow time for a general election or for another referendum. It would also allow for other more radical ideas, such as the formation of a government of national unity, or some sort of national convention, or citizens’ assemblies, to attempt to heal the great divide in British politics.

The trouble is that none of the radical ideas appeals to either May or Corbyn. Indeed, although Corbyn pays lip service to the need for a general election, he would be unlikely to win. It would almost certainly produce a hung parliament again, with Labour’s only prospect of a majority would be in coalition with the pro-EU Scottish National Party.

A government of national unity might emerge. In which case, both May and Corbyn would be side-lined. Until they are, the prospects for progress and some sort of reconciliation in British politics look bleak.