Home Eye on Europe A Stress Test for Italy’s Coalition

Italy’s clash with Brussels over its budget proposal is just the latest in a string of problems threatening to destabilize its shaky coalition government. Luigi Di Maio is trying to keep the coalition together while warding off challenges from outside his party and within. 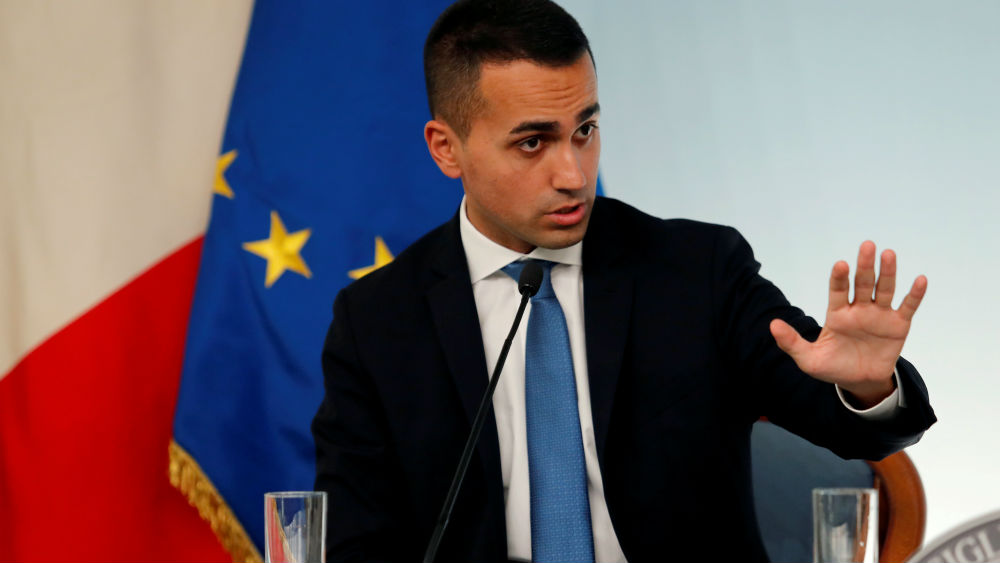 Italy’s deputy prime minister, Luigi Di Maio, did not look like a man under siege. Dressed in a suit and tie, the dapper 32-year-old flashed a smile as he faced the media last Friday (Nov. 9) to complain about persistent attacks on the government, questions about its long-term survival, and whether its controversial budget would be rejected by Brussels.

The head of the populist Five Star Movement (M5S) had weathered one of his toughest weeks since his populist party and the far-right League party had formed their uneasy ruling coalition this summer.

Italy has been on a collision course with Brussels after presenting a 2019 budget plan that the European Commission warned would raise the country’s deficit to around 2.9 percent of GDP in 2019, veering very close to the 3 percent limit allowed by the EU in its rules on debt and deficit. The Commission has demanded a correction to the draft budget, but Italian leaders are refusing to budge, spurning Europe’s demands to present a new, revised plan by Tuesday. The standoff has sparked uncertainty on financial markets and triggered fears across Europe that Italy’s ballooning debt will drag down the rest of the eurozone.

But DiMaio’s eurozone woes are just the beginning. He’s also facing growing problems much closer to home, where he’s been dealing with an internal revolt after five of his Five Star senators abstained from a confidence vote called by Interior Minister Matteo Salvini over his controversial security bill, a decree that clamps down on migration and asylum. The senators are against the legislation because they felt it strips away all humanitarian protection for migrants and is inconsistent with Five Star values. They’re now facing a party inquiry for abstaining, and they could be expelled.

“Will there be consequences? I am not afraid,” said one of the rebel senators, Paola Nugnes, a Neopolitan elected in 2013.

Di Maio has also faced embarrassing questions about the future of Rome’s Five Star mayor, Virginia Raggi. She swept into office promising to end corruption, overhaul public transport,  close Roma camps, and promote business and tourism. Instead, Rome is sinking in trash and potholes, and thousands of Romans took to the streets in late October to protest the capital’s run-down conditions. At the same time, Raggi has been embroiled in a scandal over corrupt hiring practices after appointing the brother of a close ally to be Rome’s tourism chief. While she was cleared of the charges, she remains deeply unpopular for failing to stop the city’s degradation and modernize its shoddy public transport.

If all that wasn’t bad enough, the Italian daily, La Repubblica, accused Di Maio’s father, Antonio, who runs a construction business, of building an extension on the family home back in 2006 without securing a permit.

Di Maio lashed back, saying: “To all these people who spew poison at me, and the Five Star Movement, every day I say, ‘Give us a little more love.’”

The foundation of Di Maio’s political future is a marriage of convenience with Salvini, who is now widely considered Italy’s most powerful political leader. Backed by a relentless social media team, Salvini’s aggressive anti-immigrant platform and his outspoken criticism of the EU have helped to lift his party’s popularity to 30.5 percent, while M5S has dipped to 28.5 percent, according to a recent poll. The coalition government, in other words, is still widely successful. But political differences between the two deputy prime ministers are constantly making headlines.

Last week, Salvini scheduled a parliamentary confidence vote after a slew of Five Star amendments to his security decree, which makes it easier to deport refugees and migrants who have arrived in Italy in recent years. The bill would also put an end to two-year “humanitarian protection” residency permits that were given to 25 percent of asylum-seekers last year. The lower house of parliament has until the end of November to approve it.

Separately, Di Maio and Salvini have clashed fiercely over changes to overhaul the statute of limitations on trials. M5S, which made fighting corruption their battlecry in getting elected to the government, wants to ease the limits on prosecuting a series of infractions, including white collar crimes. After much wrangling, Di Maio and Salvini were able to save face and strike a last-minute compromise.

Yet the leaders’ opposing views over yet another issue–the future of the TAV Turin-Lyon high-speed rail link–were thrown into stark contrast over the weekend. The project has sparked fierce debate in Italy, pitting environmentalists, who object to constructing a 60-kilometer-long tunnel between between Maurienne in France and the Susa Valley in Turin, against those who favor its development.

League supporters see the project as a means of creating jobs and growth: more than 30,000 people took to the streets of Turin to demand that the rail link proceed. Salvini, meanwhile, has consistently voiced his support for the 270-kilometer rail link. “I am convinced that Italy needs more projects, more bridges, more roads, more railways, more airports, not fewer,” he said on the issue.

But the budget for the link has mushroomed. Originally slated to cost €9.6 billion, Italy’s transport minister Danilo Toninelli said recently it would now cost €26.1 billion. “I can only feel anger and disgust at how Italians’ money has been wasted,” wrote Toninelli, a M5S member, on Facebook in July.

Amid all the turmoil, unnamed League sources have started speculating about an imminent coalition collapse and potential elections in March. Salvini has tried to quash rumors, saying in a statement: “There is no conflict, we are working well with the Five Star Movement. Our government has very high popularity levels and in five months we have done more than anyone else.  We are going forward united in order to change the country.”

While Di Maio also insists there’s no risk to the government’s long-term survival, he is facing yet another challenge within the party, and not only from the rebel senators who abstained from the confidence vote.

Soon he will have to deal with the return of Alessandro Di Battista, a popular M5S politician and former MP currently on sabbatical with his family in South America who is widely seen as Di Maio’s main rival. Di Battista is openly critical of Salvini and is often dubbed “Five Star’s Che Guevara” because of his passion for the Latin American revolutionary, and he’s considered the movement’s most prominent leftist. He has often adopted a hardline against political corruption while criticizing the League’s hardline stance on immigration.

He decided not to run in this year’s national election but regularly expresses his outspoken opinions to his 1.5 million Facebook followers, with his partner and toddler by his side. His return to Italy in December is certain to highlight internal policy differences and exacerbate divisions between M5S and the League.

Giovanni Orsina, professor of political history at Rome’s Luiss University, says M5S is an ideologically complex movement still in its infancy, and under Di Maio it has appeared ambiguous about its policies while allowing the more aggressive League to largely set the political agenda.

“Parts of the Five Star Movement are very unhappy with this government and they think Di Maio is not negotiating hard enough,” he said. “But the movement has not yet grown up.”

The biggest priority for the coalition right now is winning the European Union’s approval on the budget, which they insist will only total 2.4 percent of GDP, not 2.9 percent as the European Commission has predicted.  And it would seem that neither Di Maio nor Salvini want to tear their coalition apart before the European elections in May.

But as M5S is struggling to evolve from a grass roots, populist protest movement into a fully-fledged political party with coherent policies, that is becoming an increasingly difficult task.

“They have a major identity crisis,” says Orsina. “They know what they don’t want, but they don’t know what they want. I still believe the coalition will survive until the European elections. But anything can happen and the pressure certainly is growing.”