It’s tempting to see a nefarious and belligerent Russia behind every threat. But has the West created a convenient bogey man? 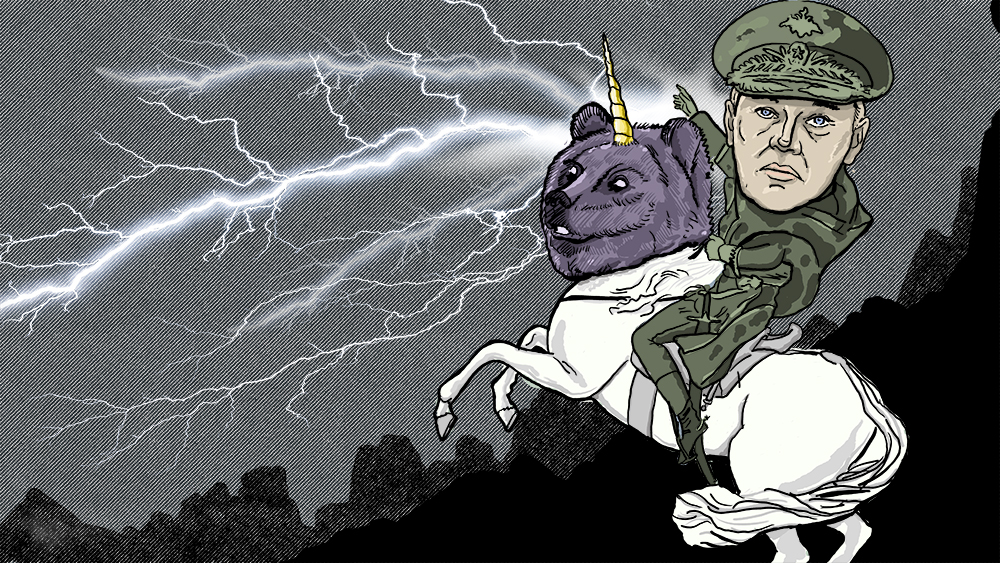 It could be the title of the latest blockbuster action movie, but instead it has become the rallying cry of Russia hawks across the West. What is the latest fiendishly complex, ruthlessly cunning threat we face from the Kremlin? Why, of course it’s the “Gerasimov Doctrine.”

Named for Russia’s Chief of the General Staff, General Valery Gerasimov, this is a supposed plan for combined psychological, political, subversive, and military operations to destabilize the West. Or perhaps just covert operations and disinformation, without the shooting. Or maybe the aim is to destroy the whole architecture of the global order. The very confusion about what exactly this “doctrine” entails betrays the basic point: it doesn’t exist.

I really ought to know, as I was the one who incautiously and unintentionally launched the “Gerasimov Doctrine.” Back in 2013, a speech Gerasimov delivered to a Russian military conference was published in the obscure journal called the Military-Industrial Courier. It made some interesting points, and so I published a translation by Robert Coulson of RFE/RL on my blog, In Moscow’s Shadows, along with my own thoughts and annotations.

In a bid to make it eye-catching, I gave the article the tongue-in-cheek title “The ‘Gerasimov Doctrine’ and Russian Non-Linear War.” It was a mistake I will regret forevermore, because even though in the text I explicitly stated that it wasn’t a doctrine and wasn’t even necessarily Gerasimov’s thinking, it turned out that a snappy headline is much more influential that the actual detail written beneath it.

Before I knew it, the “Gerasimov Doctrine” was being hailed as the Russian blueprint for future war. For the Financial Times, Gerasimov was “the general with a doctrine for Russia,” while Politico warned that “Russia’s new chaos theory of political warfare” was “probably being used on you.” It was even cropping up in official Western military documents.

Yet the text was in no way framed as a new Russian war plan. Instead, when Gerasimov talked of a “blurring of the lines between the states of war and peace” in which “the role of non-military means of achieving political and strategic goals has grown, and, in many cases, exceeded the power of force of weapons in their effectiveness,” he was explicitly addressing what he felt was a new Western way of war. To the Russians, the risings of the Arab Spring and the post-Soviet Eurasia’s Color Revolutions were not simply popular responses to corrupt and authoritarian regimes, but the result of cunning Western—American—campaigns of covert destabilization.

So why did an article in an obscure defense magazine shape Western perspectives on Russian military thinking and, by extension, political ambitions?

The first answer is Crimea. The seizure of the peninsula in February 2014 by the so-called “little green men” was efficient in its execution but not especially novel in its means. Deploying troops without clearly identifiable insignia? Breaking the enemy’s lines of command and communications? Lying about what you’re doing? None of these were really ground-breaking.

Nonetheless, coupled with the subsequent incursion into Ukraine’s Donbass region (a more plausible case of unusual, asymmetric tactics, with its reliance on thugs, gangsters, mercenaries, and nationalists as proxies), it crystallized the notion that somehow Moscow had imagined and adopted a brand-new style of warfare.

More than anything else, this mythical doctrine was the sum of all fears held in the West about a modern world that once had seemed so comfortable—history had ended, remember? —and now was chaotic and threatening. The transatlantic relationship was under pressure, first as Barack Obama “pivoted to Asia” and then when Trump introduced a confrontational new transactionalism. Challengers from Beijing to Tehran were questioning the international order. Even the foundations of Western democracy and the European project were coming under pressure.

In such a climate, how comforting to have someone to blame. From Trump to Brexit, the rise of ultra-right anti-migrant movements to ultra-left climate activists, the West could affect to spy the sinister hand of Moscow—or its trolls and tweets—at work. How convenient to be able to portray these processes as the products of foreign interference rather than of domestic shortcomings.

And the Russians made such good villains. Consider Putin’s triumphalism over his Crimean land-grab and the stone-faced and cold-hearted denials of any blame for the shooting down of the MH17 airliner over the Donbass by Russian-backed forces using a Russian-supplied missile. Consider the string of Russian-linked assassination plots. Gerasimov himself even looks like a stock figure from Hollywood, the habitually-impassive, slab-faced Russian heavy.

The irony is, that even while railing against the “Gerasimov Doctrine” meme, Moscow itself helped it spread. A second-rank power trying to present itself as a global player—and given that politics are about perceptions, this means scaring or seducing other countries to treat it as such—Putin’s Russia actively seeks to look more formidable and threatening than it is. Hence the bomber patrols willfully straying into NATO airspace, the inflammatory rhetoric, the adventures in Syria and Libya.

Gerasimov is a decorated tank commander and a tough and competent manager of the Russian high command. His career has shown no evidence that he is a ground-breaking military theorist—or even that interested in the scholarship of war. He probably didn’t even write that famous speech himself. Nor is what people claim to see a “doctrine” in the Russian sense, which is a foundational notion of the wars Russia expects to fight and how it plans to win, driving everything from what weapons to buy to how many soldiers to recruit.

So what, though? Given that it is hard to deny that Russia is deploying propaganda, covert influence operations, threats, and “black cash” (untraceable, corrupt money) to divide, distract, and demoralize the West, and given that it has shown a willingness to back its political ambitions with military force, what’s in a name?

The academic pedant in me replies that it matters in its own right. Yet from a wider policy perspective, this myth also has several serious dangers. First, it mistakenly makes Russian policy somehow new and distinctive, whereas actually it simply reflects how inter-state conflict is changing in a modern age characterized by deep interconnections of our economic, information, and cultural spaces—and by the increasingly prohibitive cost of military conflict.

Second, by allowing the West to blame Russia for everything from political disaffection to football hooliganism, we get distracted us from addressing their root causes. Groups and individuals who have their own motivations are disenfranchised. Labelling them Moscow’s “useful idiots” only pushes them further into opposition.

Third, it misrepresents Russia’s approach in such a way as to distort Western policy. Central to the “Gerasimov Doctrine” notion is that there is a single Russian strategy, and—as in Crimea and the Donbass—all the political and social disruption is simply a prelude to war. In fact, the Kremlin is fundamentally risk-averse, with no signs of further territorial ambition, and a keen awareness of its relative weaknesses compared with the West. A European focus on when and where the “little green men” will appear next is a distraction, at best.

More to the point, Moscow’s approach is opportunistic, fragmented, and often contradictory. There is a broad vision from the Kremlin, but most of its interference in the West is driven by the interests and imaginations of individual actors and agents. If we truly want to resist Putin’s “political war,” we need to address the weaknesses they exploit in Europe, not look for some sinister grand plan in Moscow.