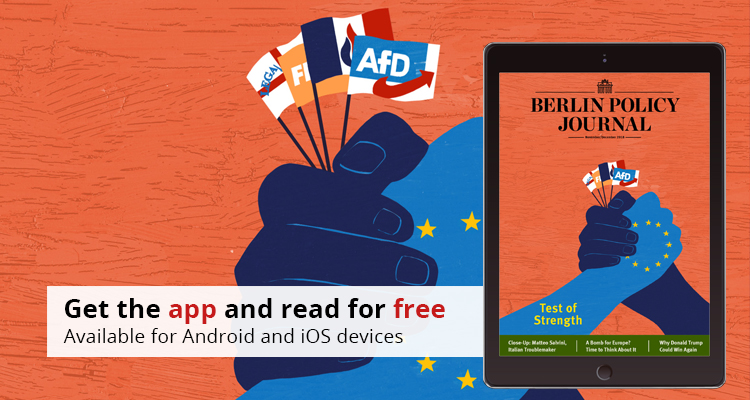 A Test of Strength

Right-wing populists won’t be able to undermine the EU’s institutions. But they may shape its external policies.

Since its breakthrough in 2013, Germany’s AfD has gone from strength to strength.

Right Between East and West

Austria’s Chancellor Sebastian Kurz has positioned himself
as a political intermediary.

Italy’s new strongman is spoiling for a fight with Brussels.

As the European elections draw closer, Emmanuel Macron is
going back to a familiar playbook. But will it work?

The UK’s departure is forcing euroskeptic parties in
Strasbourg to reorganize and restructure.

The chancellor’s time at the helm is drawing to a close.
She should’ve put EU reform higher on her agenda.

Where Heiko Maas Is Wrong

Germany’s foreign minister assumes the US is retreating
from the global stage. That’s questionable.

A second Trump term is not unlikely.

The End of Linear Thinking

Imagining US foreign policy beyond 2020 means
learning from past mistakes.

The EU has a new name for refugee centers.
But don’t expect a breakthrough.

The European Intervention Initiative is off to a promising start.
It will be a test for Franco-German cooperation.

A Bomb for Europe?

It’s time to think about a European deterrent, again.