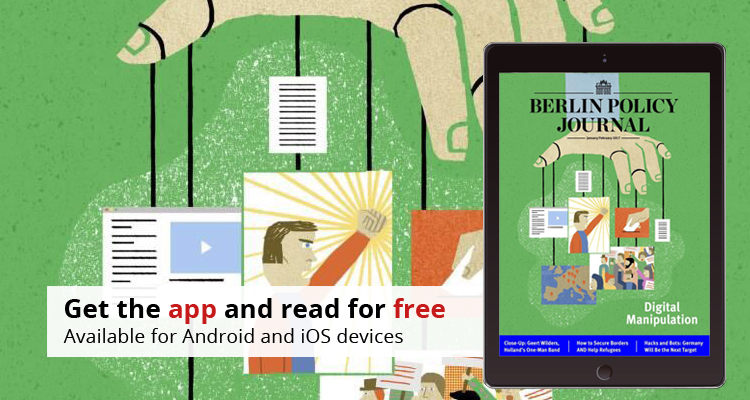 Politics by Other Means

The West’s open societies and democratic institutions are under attack. It’s time to brace for a fight.

“It’s Not a Matter of Law, but of Counter-Measures”

How Germany can combat interference in its 2017 elections.

Berlin wakes up to the challenges of Russia’s online offensive.

“It Gets Dangerous When the Center Starts to Crack”

The Green lawmaker on being the target of a Russian hacking attack.

The ascent of the Netherlands’ wild-boy populist was long in the making. But he’s still a long way from taking the top job.

New Deals for the Old Continent

Damage control isn’t the only answer to the Trump presidency. Europe has to take its fate into its own hands.

Atlanticists need to convince the new US administration of the lasting value of the relationship – and have a back-up plan if that fails.

How to make the EU-Turkey agreement on refugees stick – and apply its lessons to African migrants taking the perilous sea-route to Italy.

The Visegrád group was the EU’s most effective internal opposition. Now it’s showing signs of disintegrating.

Russia’s president is more a product of Russia’s political landscape than its architect.

New Kid on the Block

The ambitions of the People’s Liberation Army are beginning to approach Europe’s backyard.

China is strategically buying up influence and innovation. This will have major consequences for the West.

The landmark art exhibition that wasn’t has dampened German-Iranian relations.