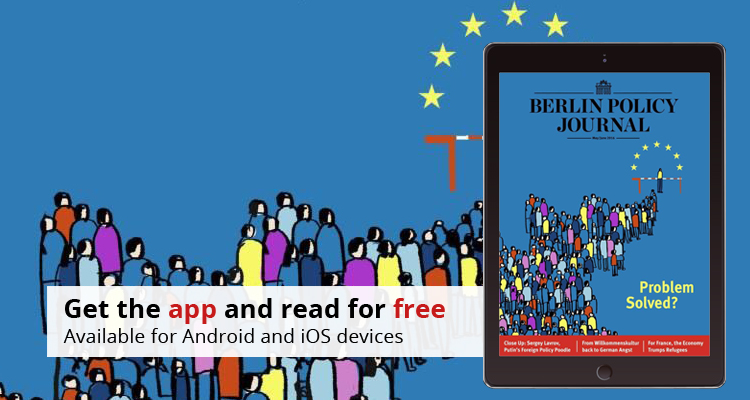 “We Are All on Guard”

How Berlin has been coping with the refugee crisis, and still is.

“The Germans Have to Admit that  They Need Their Neighbors”

From Willkommenskultur to German angst – and back?

One Crisis among Many

From Sprint to Marathon

Once a way station for refugees, Greece now has to house tens  of thousands for the foreseeable future.

Italy braces itself for becoming refugees’ and  migrants’ first port of call again.

Russia’s foreign minister serves largely as the figurehead of a foreign policy beyond his control, argues Leonid Ragozin.

“It Could Get Much Worse”

What the Panama Papers reveal about Vladimir Putin’s regime.

Strengthening, not easing, sanctions against Moscow would  be the right moral choice.

europe and its periphery

The Sum of Its Parts

Some ideas NATO should discuss at its  upcoming Warsaw summit.

French goals in Syria are more complex – and  determinedly pursued – than its allies assume, but  Paris lacks the means.

Germany prefers flexing the economic muscle  while remaining reluctant to use military force. It is  still a “geo-economic power”.

Built-in contradictions between market and state  create the risk of economic stagnation.

Why are film and television producers trying  to revive the 1980s?

The Co-Chair of Europe’s Green Parties on broken status quo politics and the (culinary) temptations of Brussels.