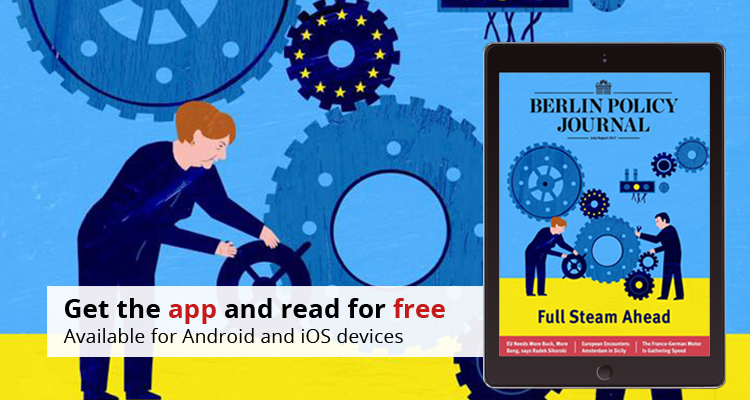 Taking the Bull by the Horns

Why Paris and Berlin should not wait until after the German elections to get going.

Ode to (Some) Joy

Where France and Germany are likely to chime – and occasionally clash.

“We Need to Fix Our Economy, That’s for Sure”

Poland’s former foreign minister on how to make the EU stronger.

All eyes are now on France’s economy minister. Is he the right man to push through much-needed reforms?

“You Grow with the Job”

Germany’s defense minister on how to advance European security in turbulent times.

Chancellor Merkel is right, the old times are over. Here’s what a new German foreign policy could look like.

Berlin not only needs to do more, it needs to want to do more – and have a strategy to go with it.

RUSSIA AND THE WORLD

To Reform or Not to Reform

What lies behind the US-German spat over new Russian sanctions affecting the Nord Stream 2 gas pipeline?

Protectors of the Truth

Back from the Brink

In a new low, German troops leave the Incerlik airbase. But there is scope to rebuild Turkey’s relations with Germany and the EU on the economic front.

“We Need More Amsterdam in Sicily”

Addressing the refugee crisis and the rising numbers of African migrants arriving in Italy, the EU needs new thinking.