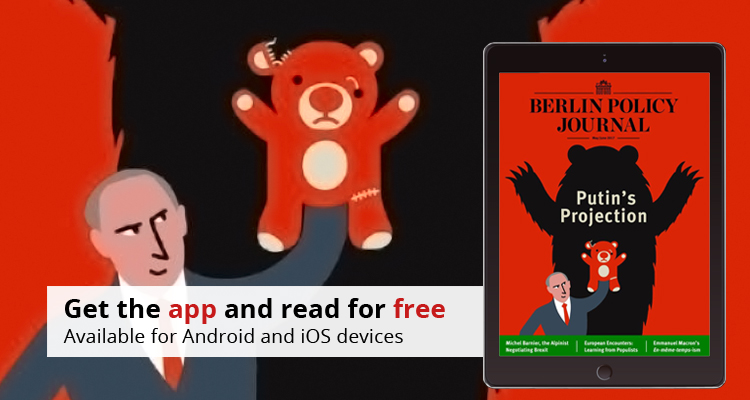 Then and Now: Two Maps

Vladimir Putin has made Russia appear mightier than it is – with some help from the West.

As the Worm Turns

Russia’s economy is strong enough to survive, but too weak to reform.

Russia’s Internet offensive against the West isn’t exactly new. The Kremlin has been using the very same tactics on the Russian opposition for years.

Why some in Germany and Europe are stuck in geopolitics of the past.

With Britain gone, the European Union has to change. A personal reflection on how.

Budapest and Warsaw are undermining the EU’s values, but Brussels’ kid gloves are only making them bolder.

Off to a Rough Start

Where Europe stands with the new US administration one hundred days on.

For Emmanuel Macron, these three little words are a condensed vision of the world as he sees it.

The Trump administration’s attitude to climate change is a setback, but Europe can help states outmaneuver Washington.

“We Should Create More Spaces for People’s Participation”

Passion always seems to be on the side of anti-European Union forces – but that can be changed.